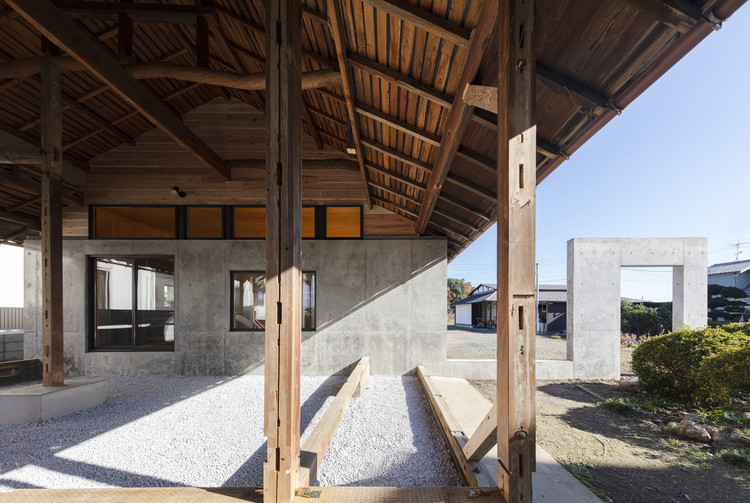 Text description provided by the architects. This is a project to reduce a traditional 50 year old Japanese house because it is too large for two adults to live in. Originally, it was a corridor + marginal type, and the interior was dark as a whole, and there was almost no light even on the north side during the day.

According to the inspection, it was also revealed that the existing main house had no seismic resistance and only the eastern extension was braced, so the overall seismic balance was poor. Therefore, we decided to dismantle the building west side (about 1/4 of the whole) leaving behind the “framework and roof”.

The Japanese roof tiles of this house were quite good, and we felt that the essence of the tiles was effective on the gable-end side. As a result, a semi-outdoor space is created, and by applying gravel to the inside of the foundation, it becomes a rock garden with a mysterious texture.

Furthermore, RC walls were used at the boundary between the rock garden and the interior space. Hitting RC at a height that does not reach the wooden beam, swallowing existing wooden pillars and tightening them to make “shorter columns” and perform seismic reinforcement that RC is not too effective, and expected as a texture that evokes a new life. This RC wall extends from the house and also serves as the gate of the shrine on the site.