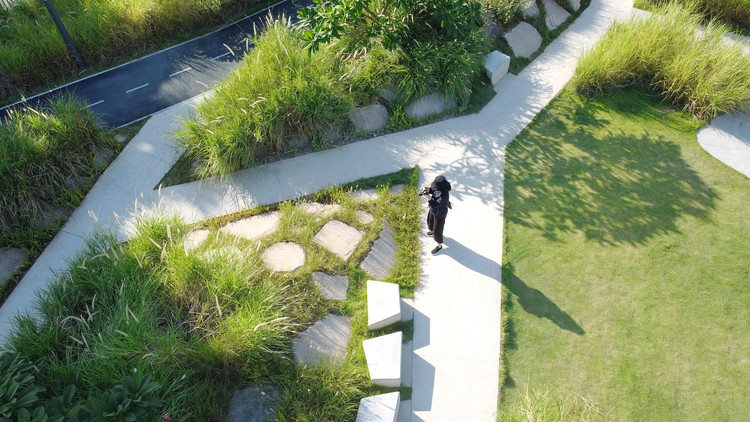 Land vacant for twenty years
The Meilin area is located in the north of Futian District and is also the “backside”. It is mainly mixed with functions such as urban villages, old houses and industrial areas. The urban buildings are aging and the spatial quality is not high, forming a large number of “urban blind spots”. Meifeng Community Creative Park is located at the intersection of Zhongkang Road and Beihuan Road in Futian District. It covers an area of 4,674.35 square meters. The plot originally belonged to the same plot as Linbian Community. Due to disputes between the owner and the developer, the site was closed in 2000. Division processing. The public facilities promised by the developers to the owners have not been realized, and the owners are therefore very sensitive to the construction of the land. They have repeatedly resisted the development of the land, and the land has been idle for nearly 20 years.

In March 2019, the Shenzhen Urban Design Promotion Center was commissioned by Meilin Street to launch the “Xiaomeisai Urban Micro Design·Melin Action” competition. The competition realized street agencies + community planning service agencies + professional designers + residents + third parties in the form of workshops The five-party combination team of professional consultants, Shenzhen Self-organized Space won the first prize of this competition, and participated in the design and construction of the park as the designer.

Site Statement
The current site is a vacant reinforced concrete floor, surrounded by walls on all sides, and there is a certain height difference with the surrounding land. The interior is occupied as a temporary parking lot. Due to long-term vacancy and lack of management, some areas have become garbage dumps. The weeds around the site and the harsh environment are in sharp contrast with the neighborhood communities and urban roads beyond one wall. In the high-density Meilin area, Such an abandoned plot is even more incompatible with the surrounding environment.

Design Strategy
The design of the park is based on the principle of “openness, ecology, and diversity”. The site and its surroundings are systematically sorted out, the walls are removed to open the boundaries of the park, and the park’s accessibility to urban streets and communities is established; the existing reinforced concrete floor is destroyed to make the land Re-breath and establish an ecological landscape base; improve the park’s road network and basic service facilities, and consider the surrounding users to set up multiple recreational and entertainment venues such as children’s play grounds, stepped squares, cultural display corridors and jogging tracks to make the venues safe and comfortable The community park in the city turns the originally enclosed wasteland into an urban park that revitalizes the surrounding communities.

Re-breathing land
The current situation of pure hard ground cannot achieve the foundation of diversity, so the first step is to smash the concrete floor and let the land breathe again to build a new ecosystem. Using broken concrete blocks to create micro-topography into a cracked garden, the old concrete blocks and the plants in the cracks form a harmonious symbiosis. The natural and wild cracked garden has also become a playground for children to play and chase.

Low-cost landscape
Due to the short construction period and low cost, this project is different from the large-area stone paving and large-scale seedlings in traditional municipal parks. It adopts low-cost and low-maintenance strategies for design and construction. The smashed old concrete blocks are used as landscape materials and stacked to form a micro-topographic crack garden; small fragments are used as materials for filling stone cages; smaller fragments are used as underground gravel layers for sponge city technical measures to drain Seepage rainwater. In terms of plant design, local tree species with smaller specifications are selected for natural growth. Low-maintenance ornamental grasses and wildflowers are selected for natural planting of bottom plants.

Activiate the diversity of public behavior in community
Before the site was renovated, it was a deserted land that no one cares about. A constant flow of cars and people pass by every day, and there were no public activities when the border was closed. After the renovation, the open boundary guides surrounding residents and passers-by into the park activities, which provide social, rest, parent-child, exercise, play, and various activities held from time to time. The openness and tolerance of the park allows everyone to be equal The opportunity to enjoy quiet and rest.