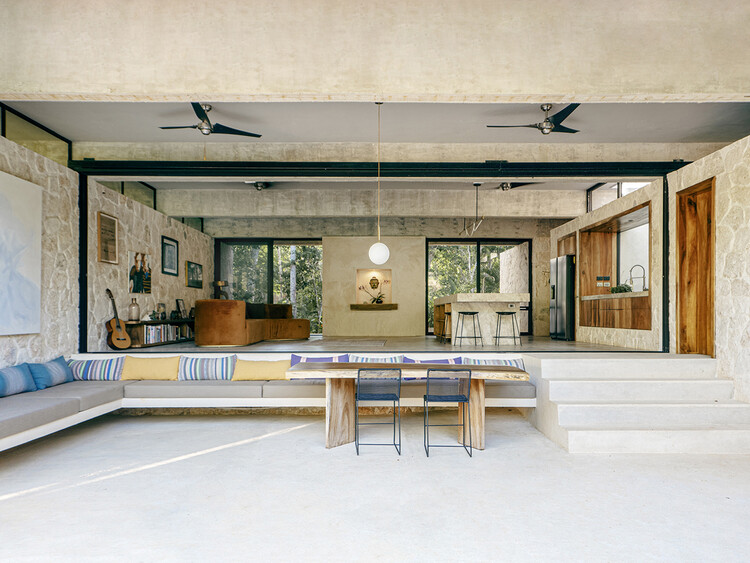 Text description provided by the architects. The project of a villa in Mexico is situated in dense forests near the city of Tulum on the Yucatan Peninsula. Part of the natural local vegetation also penetrates the land. Site is divided into two parts by the building itself – in front of the villa there is a forest zone and behind it a zone of lower vegetation, but also natural for the area – the Caribbean garden. The greenery on the plot is therefore characteristic of the place, but the architecture itself differs from the local one. Nevertheless, it is designed to respect local conditions and climate as much as possible.

The construction of the floor is raised above the level of the existing terrain by means of load-bearing walls so as to allow natural ventilation under the house. The same principle is used in the construction of the roof, which is laid on five massive concrete beams. The space between the beams allows controlled ventilation by the prevailing winds from the nearby sea. High humidity and a lot of sun are characteristic of this place, so in addition to ventilation, it was necessary to ensure enough shade so that the house does not overheat indoors and at the same time offers enough living space in the shade outdoors. From the side of the Caribbean garden – on its level, there is a large covered terrace – “outdoor living room”, which constitutes about a third of the house. The terrace can be closed with sliding walls with nets and thus protect the inhabitants from insects. Glass sliding walls line the interior from two main sides – they replaced the front and rear facade. Thanks to this solution, the whole space is variable – the boundaries between the interior and the exterior are lost. In the main glass area there are generous rooms – living room with kitchen and bedroom. The load-bearing walls were minimized – the stone load-bearing system consists of two walls – the side perimeter walls and the parallel core of the house, which also surrounds the masonry walls. The core hides functions – wardrobe, hygiene – bathroom for the owner and a toilet and laundry accessible from the exterior.

The villa was designed with maximum regard to the location and of course the comfort of the owner. There is a swimming pool located in the middle of the Caribbean garden behind the building, or a tower, which is an important part of the architecture itself. The stairs in the tower, bring one to the roof, where a platform for practicing yoga is created, or even a floor higher, to the very top of the tower with a view of the endless Mexican forests.