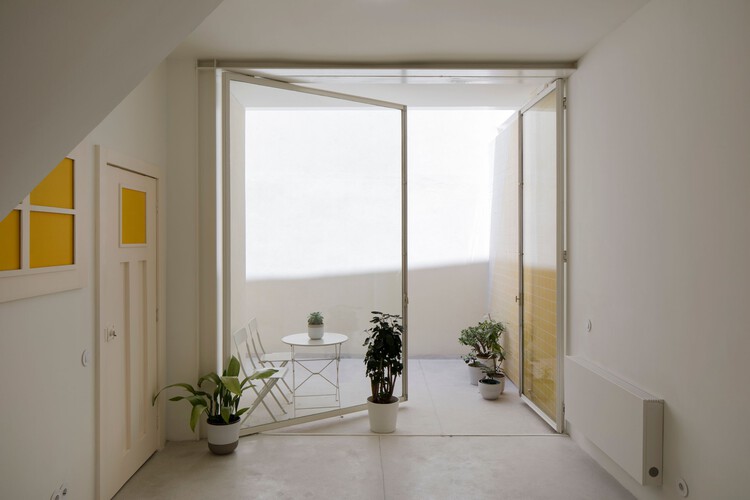 Text description provided by the architects. Casa da beiramar is located in one of Aveiro’s ancient fishermen neighborhoods, beira-mar, a downtown landscape of long and narrow old fishermen houses built on adobe, coated by colorful tiles of the local industry and filled with green ceramic flowerpots.

This part of the city has been witnessing an interesting fusion between the old dwellers and the recent inhabitants. One of the new inhabitants pretended to restore this ancient adobe house, foreseeing an evolutive program: on an initial phase, serve as two apartments and then as a house, with or without an independent office, on a near future.

We understand flexibility as a way to enrich the using and the aging of buildings – a matter of adding and layering possibilities on a specific place, so the new occupation can be multiple and transformative.

Using the two existent entrances we were able to promote this flexibility, as the mirrored doors became essential to enable and separate the new uses – from two apartments, to a house, or the owner’s new psychologist practice office.

The rehabilitation was conducted grasping and adapting traditional building methods: recovering and reinforcing the existing wood and adobe walls, endowing the existing floors and walls with a better thermal and acoustic behaviour, maintaining windows, doors and other structural and ornamental elements. The main intervention consisted in cleaning the constructive elements that had been recently and badly placed, and in introducing of two new materials: the steel structure, which takes advantage of the old adobe walls to support the wood structure, allowing to open the back facade; and the colorful tiles – some new, some old – which point out the new life of this old construction.

On the southeast facing facade, several constructions, built during the last decades, had occupied and distorted the space of what should be a former patio. In order to retreat this space, the informal constructions were demolished and the new pivot window built, allows a total opening to the new patio. This new space in-between the indoor space and the outdoors aimed to serve distinct daly life rituals, as summer meals, and winter nights around an outdoor fireplace.

On the first floor, in direct connection with the new patio, a glazed balcony was constructed, and used as a place for bathing. Placed in middle of the space, a white curtain that wraps and old bathtub, creates a filter between the intimacy of the bath moment and the open view for the overcrowded Bartomoleu Street. This new intervention aimed to research the limits between one of the most private moments of the quotidian routine and the outdoors public daily life.