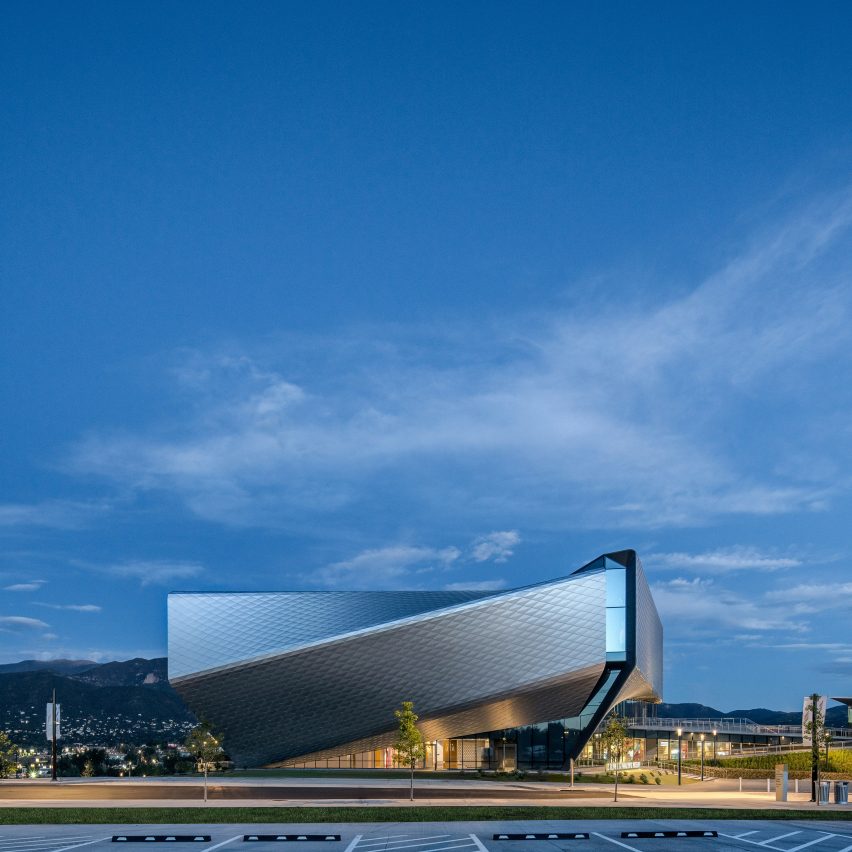 Architecture firm Diller Scofidio + Renfro has arranged the galleries of the US Olympic and Paralympic Museum in Colorado, which opens this week, around a spiralling ramp to make it one of the most accessible museums in the world.

Located in downtown Colorado Springs, the museum is composed of four steel-covered volumes arranged in a pinwheel formation that contain the galleries, an auditorium and events space.

The four volumes are wrapped in a steel superstructure that appears to fold over glazing on the ground floor, with vertical windows extending to the top of the building. 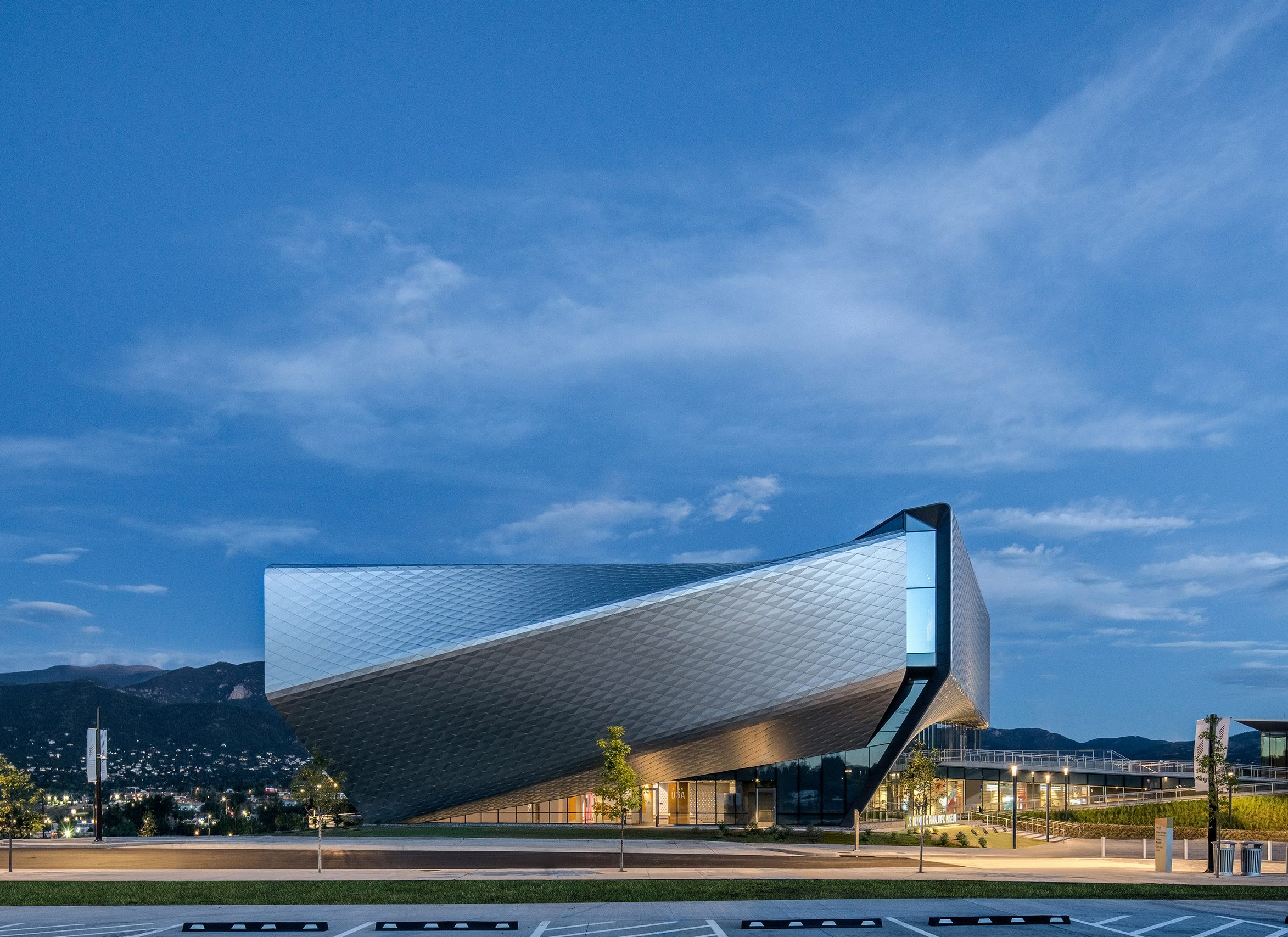 “We conceived of it as almost like a garment that was like a little bit like an Olympic athlete’s costume stretched over the structure,” said Diller Scofidio + Renfro partner-in-charge Benjamin Gilmartin.

“It kind of warps and twists with these surfaces that give it a kind of tautness. It is really meant to be a tailored garment on the outside of the building that is perfectly fitted.”

The metalwork is composed of 9,000 diamond-shaped panels that are marked in the middle and lift up in the centre to create a play of light and shadow across the facade. 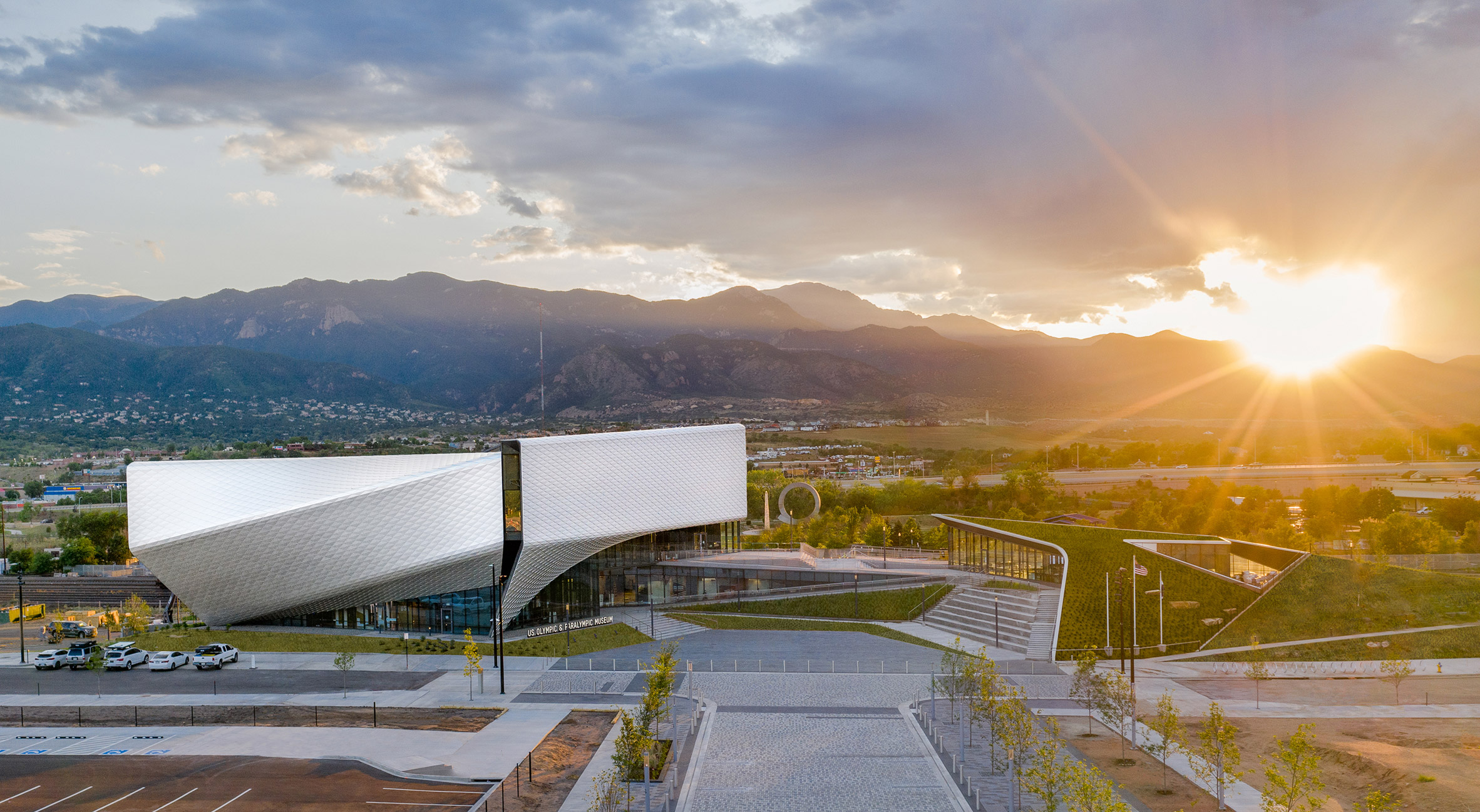 “The folding of the diamond into triangles was just the initial idea,” Gilmartin continued.

“But then we played with the shaping, we did a lot of model testing, digital studies and things like that and found that it has a really nice reaction to light. The kind of fold in the panels makes a kind of highlight with the upper part that’s tilted towards the sky, and a kind of a shadow to where it tilts down on the lower half,” he added.

“We saw [the] possibility for the kind of diamond scales or elements across the surface to really animate the surface as the light changes in Colorado Springs throughout the day.”

Visitors ascend to the top level of the museum by elevator and then gradually move through the galleries on a downward-spiralling ramp, similar to circulation in New York’s Guggenheim museum. In Diller Scofidio + Renfro’s design, the ramp measures six feet (1.8 metres) wide to allow for side-by-side movement and wheelchairs.

“It is founded on the idea of a continuous path from the top to the bottom, so we started with a vision of a kind of a Guggenheim but with a much more gentle sloping,” said Gilmartin.

It is because of this circulation that the firm said the museum is one of the most accessible in the world.

“Everyone has a kind of shared experience moving along that path regardless of ability or age, or differences between people,” Gilmartin added. “That was a really important architectural organiser.” 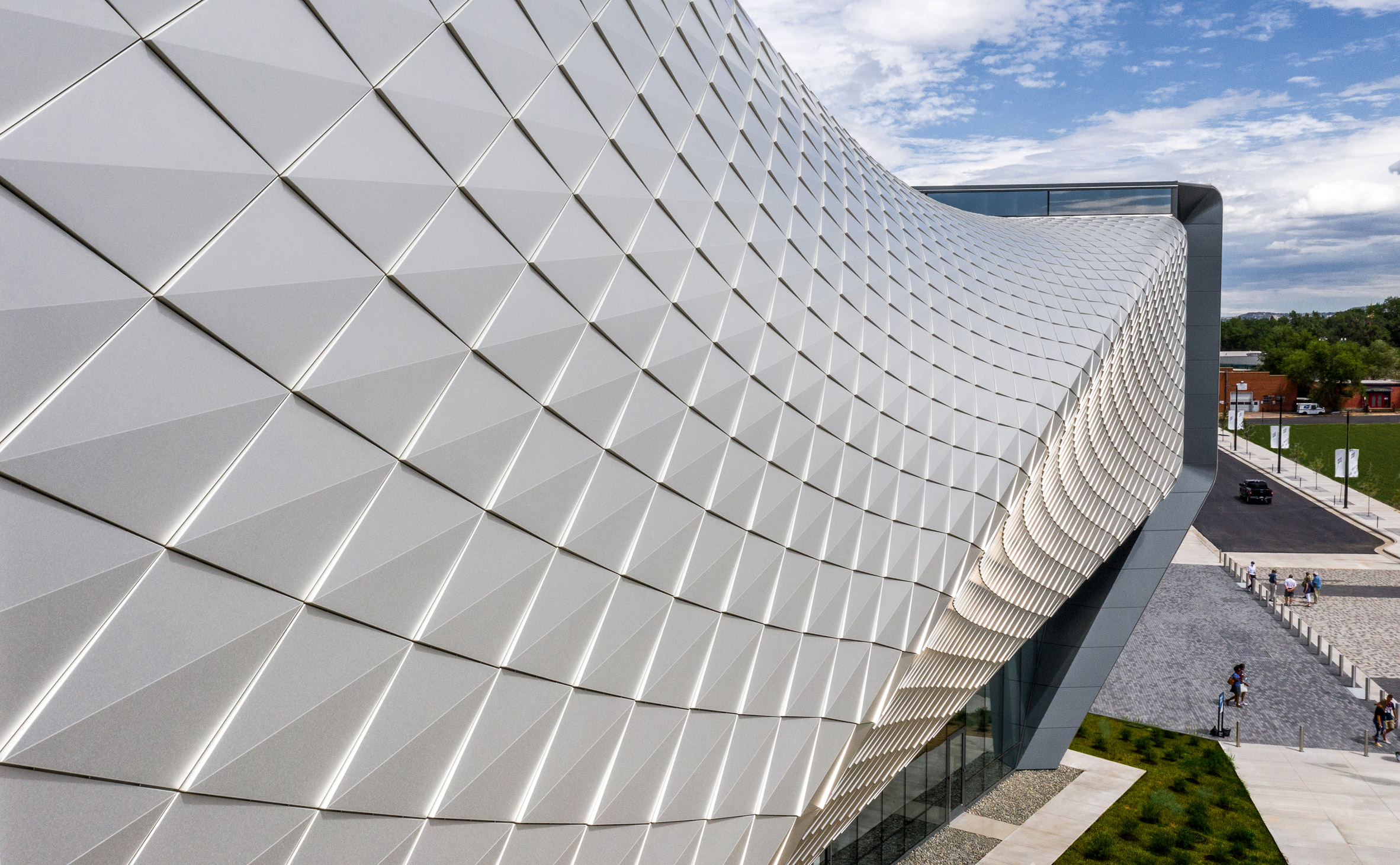 Accessibility formed a key element of the project, which is the only museum in the US dedicated to the legacy of the country’s Olympic and Paralympic athletes.

The New York practice consulted with Paralympic athletes and persons with disabilities, to create a museum in which all visitors could enjoy the same experience.

Smooth floors suited to wheelchairs, glass guardrails that allow for visibility from a low height, benches with guards for canes and moveable cafe seating are among other details designed to improve accessibility. 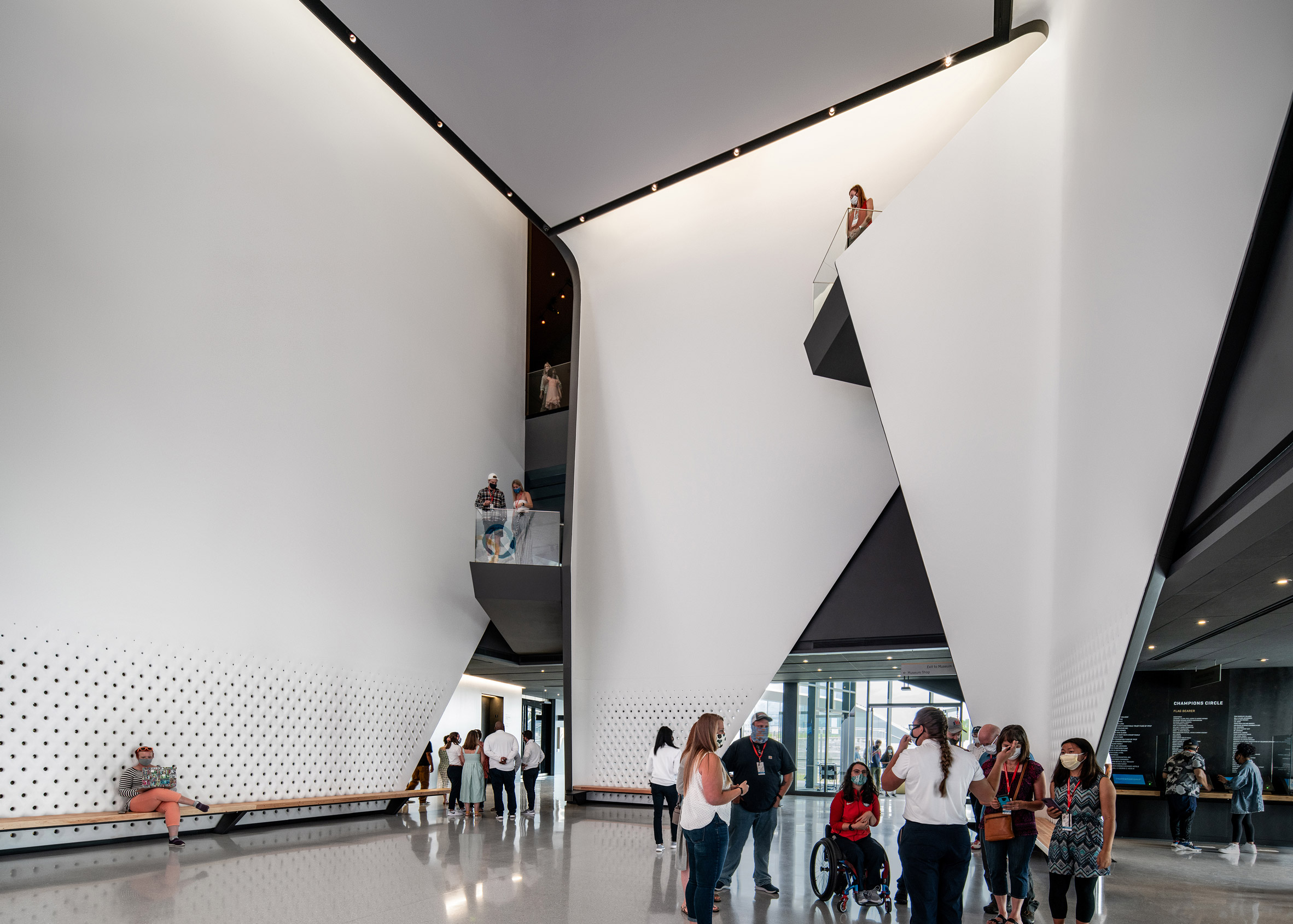 Walls around the skylight lit 40-foot (12-metre) tall atrium at the centre of the building is covered in white Glass Fiber Reinforced Gypsum screens, which are perforated towards the bottom to offer views of the rest of the lobby. Four glazed balconies in between the walls provide a place for pause for visitors as they move down the museum.

The US Olympic and Paralympic Museum has 20,000 square foot (6096 square metres) of galleries across the ground, first and second floor, interspersed with other elements of the programme.

A 130-person theatre is located on the ground floor with two rows seats that can be removed to accommodate 26 wheelchairs –  the equivalent of a full Paralympic hockey team.

On the first floor is a 1,300-square-foot (396-square-metre) events space with views of downtown Colorado Springs and the Rocky Mountain that opens onto an outdoor terrace. The second floor also has a boardroom with outdoor access.

A museum shop extends from the main museum to link to another building with a green roof on the other side of a terraced, outdoor plaza, which was placed to make the most of views to Pikes Peak and the Rocky Mountains.

This additional building contains a cafe with access to outdoor dining, that is designed to serve as a restaurant, as well a space to host educational programmes and meetings.

Diller Scofidio + Renfro also created a new 250-feet-long pedestrian bridge that extends from the museum over an active railyard to America the Beautiful Park. The bridge is composed of six prefabricated sections that will be assembled later this year. 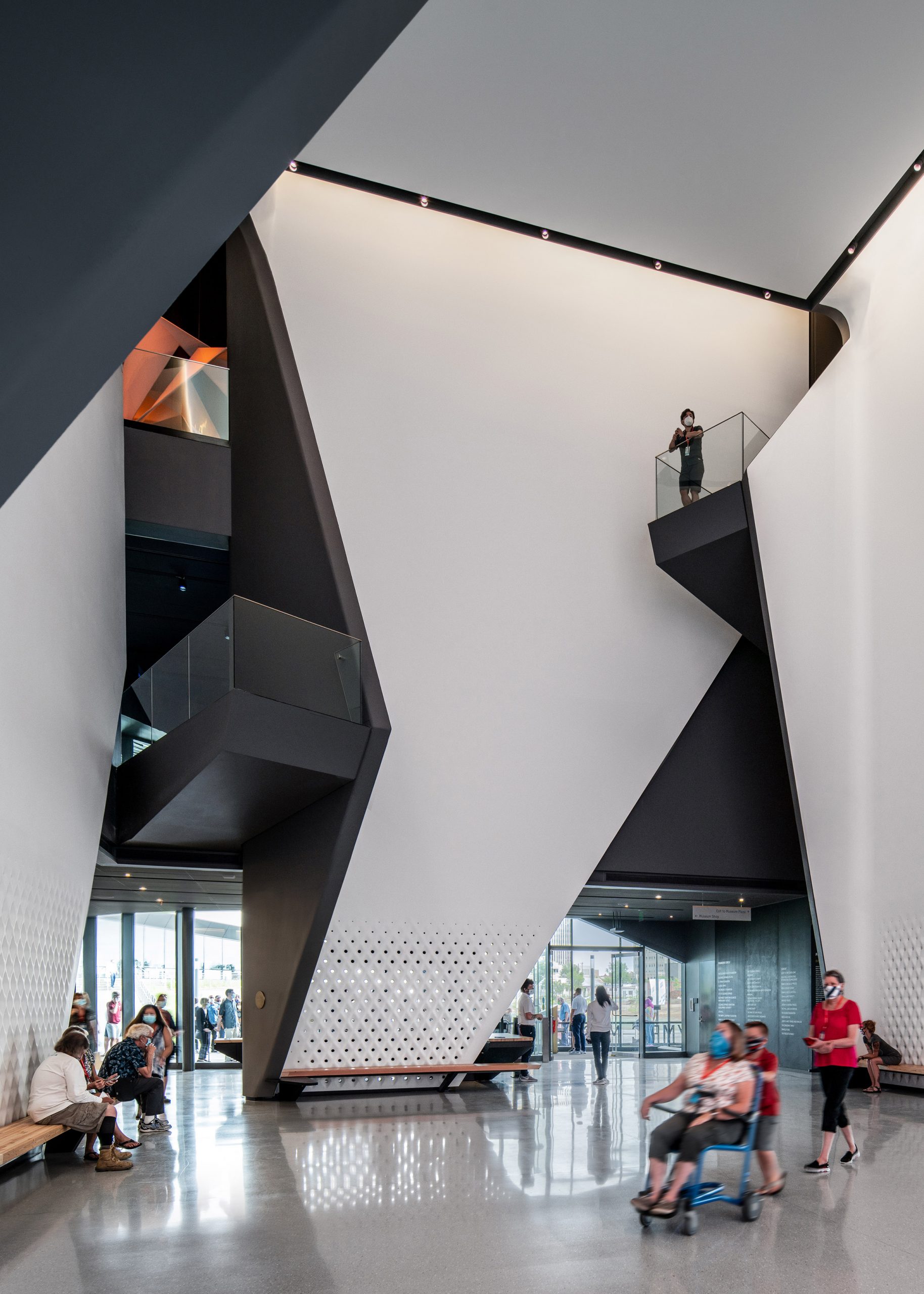 The US Olympic and Paralympic Museum, which was first unveiled in 2015 and broke ground two years later, will open on Thursday 30 July 2020 with timed tickets as part of a series of safety measures in response to the coronavirus pandemic.

It marks the latest museum project completed by Diller Scofidio + Renfro, which Gilmartin leads with Elizabeth Diller, Ricardo Scofidio and Charles Renfro. Others in the US include the renovation of New York’s Museum of Modern Art, the Broad Museum in Los Angeles and an art centre at Stanford University.

Photography is by Jason O’Rear, courtesy of Diller Scofidio + Renfro.