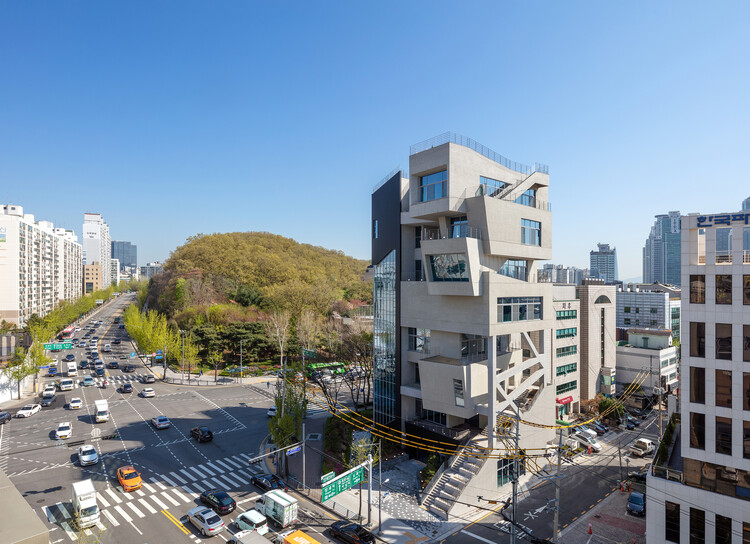 Text description provided by the architects. The site of EMK Musical Company is located at the crossroads where Nonhyeonno – one of the major roads in Gangnam, Seoul – and Nambusunhwan-ro intersect with each other. The future benefits, which will accrue from the high rent in Gangnam, especially the high rent on the ground floor, induce conflicts between the program and the desire for the office building space with abundant interior and exterior space (including the exterior space on the ground).

EMK Musical Company suggests a methodology for constructing a small to medium-sized office building those the upper and lower parts of a building are divided and utilized, by allowing the lower floors to be used as rental areas and simultaneously open to the public and the upper floors to be used like another site that has a private external area as a company building, through the ‘strategy of’ outside space floating in the air.

The practice room and office of the musical – which has the largest volume among the programs – are arranged on the basement and 5th floor, and then the upper part of each volume becomes an external space, each of which comes to have an independent external space. Particularly, the outer space on the 1st floor, which is inevitably lost by giving the lower floors of the office building as a rental space, becomes replaced with a courtyard external space on the upper floors to acquire a spatial specificity. The column structure that connects and supports the two programs will become the Main Structure of the entire building and become the base where the rest of the programs can be freely placed. In addition, the external spaces created by freely placing the rental and office areas in the upper parts of the two external spaces will be filled with various programs, such as open-air cafés, open-air offices, and outdoor conference rooms.

Among the architectural elements, the stairs are inevitably the most familiar being to users who produce Musicals. This is because, considering the characteristics of musical producers whose thought flows are directed towards the audience, their gaze is always fixed on a step-shaped structure. The external stairs that traverse and connect the volume of each floor will become architectural devices that could produce various events while users sit, lean, and pass through like in the auditorium. The external stairs connecting the 1st floor to the 3rd floor breathe with the rental area and are open to the public, providing a 3-dimensional amenity for the urban space.

By creating unique urban landscapes from various perspectives, the freely arranged architectural elements will not only form the identity of EMK Musical Company but also act as beings that give fresh changes to the urban landscape. I hope that they will become a symbolic being of the growth of EMK Musical Company, which produces and supplies content to the global market as standing at the head of the recent growth trend of K-Musical.