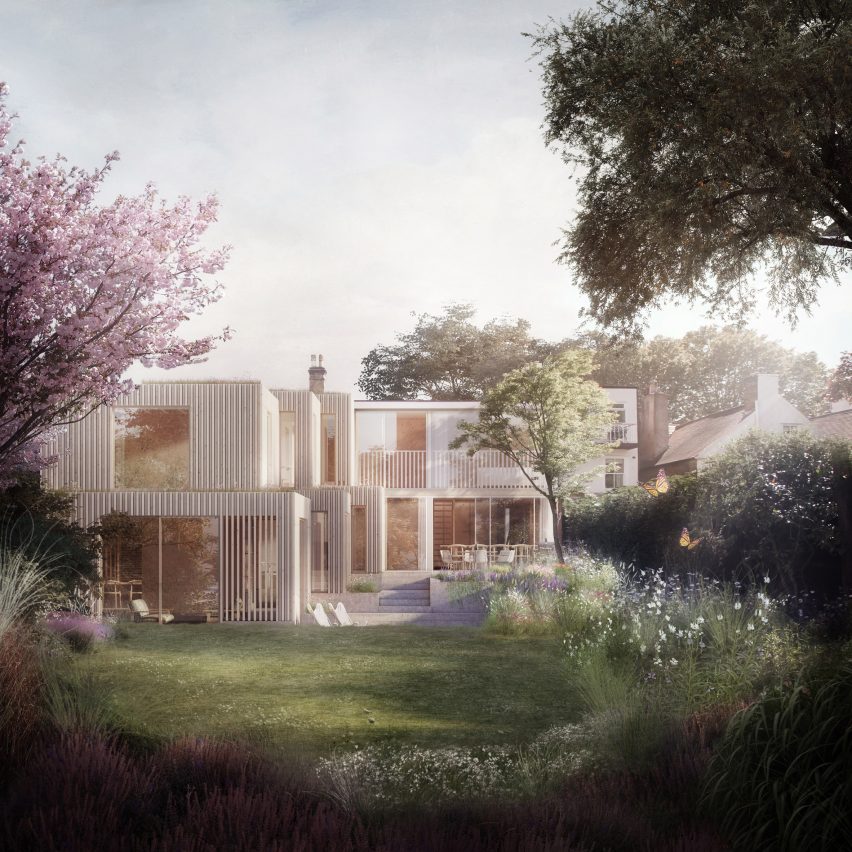 Architecture studio Morris + Company has designed an extension for the self-built home of Walter Segal in north London that is “a direct homage” to the architect’s body of work.

Located in Highgate, London, Segal built North Hill House for himself and his family in 1964.

The London-based architecture studio will renovate and extend the home in a way that aims to respect the work of the original architect, who is best known for developing a system of prefabricated, timber-framed housing in the 1960s and 70s.

“We explored Segal’s self build legacy, his approach and ambition, through documentaries in his work, our own site investigations and via texts written by Segal and others on his works,” explained Morris + Company founder Joe Morris.

“The scheme has been directly influenced by this research,” he told Dezeen. “Whilst it is true that the client will not themselves build their house, the way we envisage its fabrication and assembly is in homage to the self-build principles.”

To align with Segal’s principles, the extension will be built largely from timber using a series of repeated elements, although it will not use modular construction.

“Our vision is that the design and detail liberates the build process from excessive site-based activity, without resorting to cost-prohibitive modular construction, which makes little sense for a project of this scale,” he continued.

“Instead, readily available, highly sustainable materials – predominantly timber – will be pre-engineered for high-controlled site assembly, without the need for heavy machinery.”

Overall, the rear and front extension will double the size of the home, taking it from 166 square metres to 300 square metres.

At the front of the property, the existing access route will be reworked, while a large two-storey rear extension will be built in the garden.

The extensions will form a zigzagged route through the building.

“The original building was economic, simple, elegantly laid out, practical and functional,” Morris told Dezeen. “However, much of the fabric of the original was removed and replaced over a sequence of renovations and adaptations.”

“Our extension is driven largely by Segal’s memory, and indeed the form and composition of the interiors, as a zigzag sequence of interconnected rooms, which has influenced the tectonic composition of the new addition,” he continued.

The rear extension, which will be clad in vertical timber battens, will be deliberately offset from the original house so that the rear facade of Segal’s home will still be visible from the garden.

“Over time, Segal’s own house has been altered, and an adjacent plot infilled obscuring the original from the street,” said Morris. “The rear remains largely open but hidden to many apart from a handful of neighbouring properties,” he continued.

“That aside, the project performs many structural and compositional gymnastics to set down and away, allowing the rear facade to be as legible as possible.”

In 2017 a plan to extend Segal’s house was proposed by Jonathan Tuckey Design with an addition like an “overgrown ruin”, while Turner Prize-winning collective Assemble designed a shed for the garden. These proposals were drawn up for the previous owners of the house, but were never carried out.