Vancouver practice Motiv Architects has built a garage from cross-laminated timber as an experiment of working with the material on a small scale.

Called Eton Accessory Building, the garage is a 330-square-foot (30-square-metre) gabled structure on an alleyway in Vancouver. It is connected via a garden to the main residence that is on a separate street – a programme common in the city.

Motiv Architects created the project to house the owner’s restored vintage Mustang and to serve as a workshop for them to manage their industrial bag and belt fabrication company.

The studio built the garage with a prefabricated design using cross-laminated timber (CLT) because it wanted to learn how to use the engineered-wood building material. 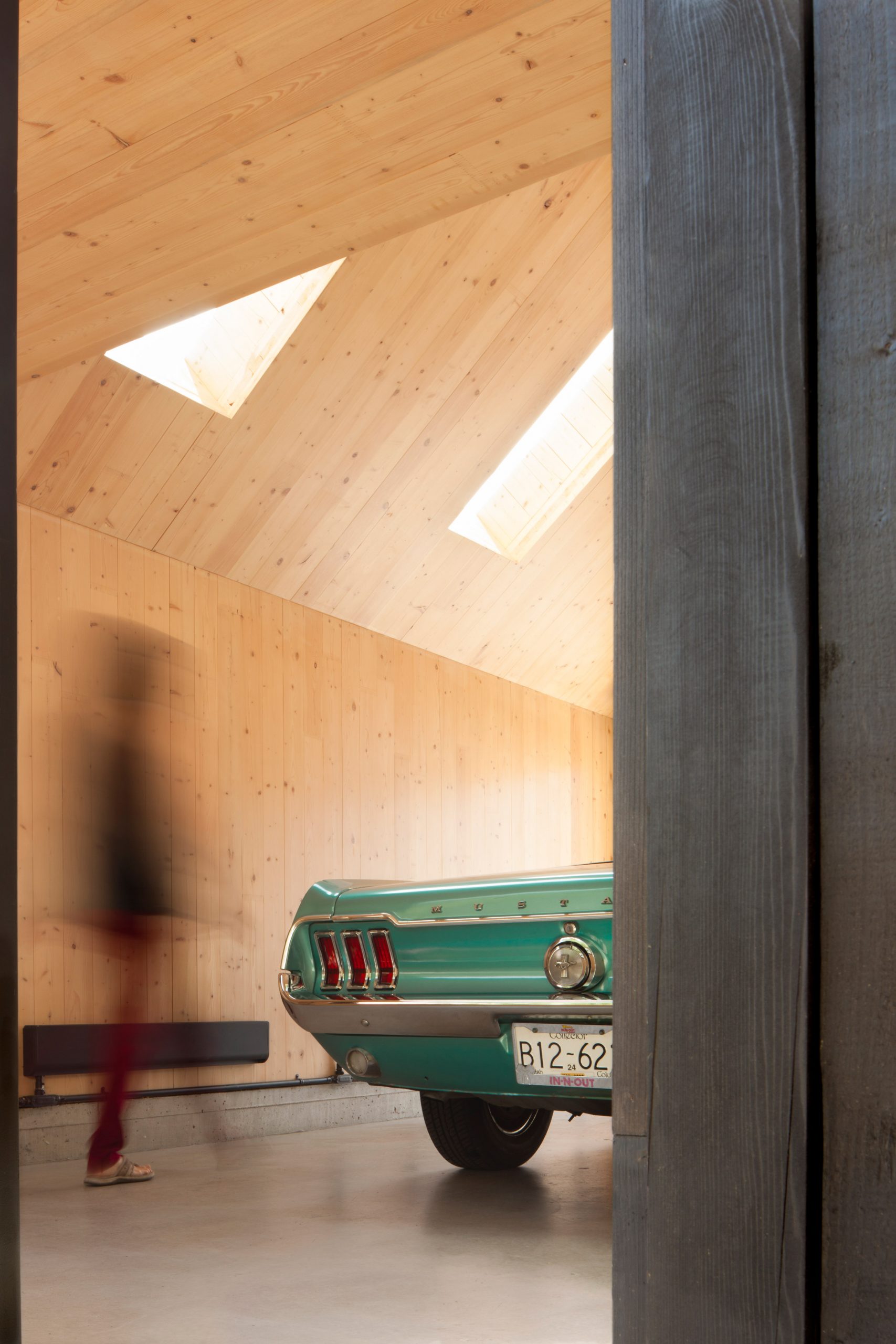 “This 100-per-cent wood structure is a testament that no project is too small for prefabrication, its design born out of a strong desire to work with cross-laminated timber – to better understand its properties as well as the efficiencies of its assembly on a project of a very small scale,” Motiv Architects said. 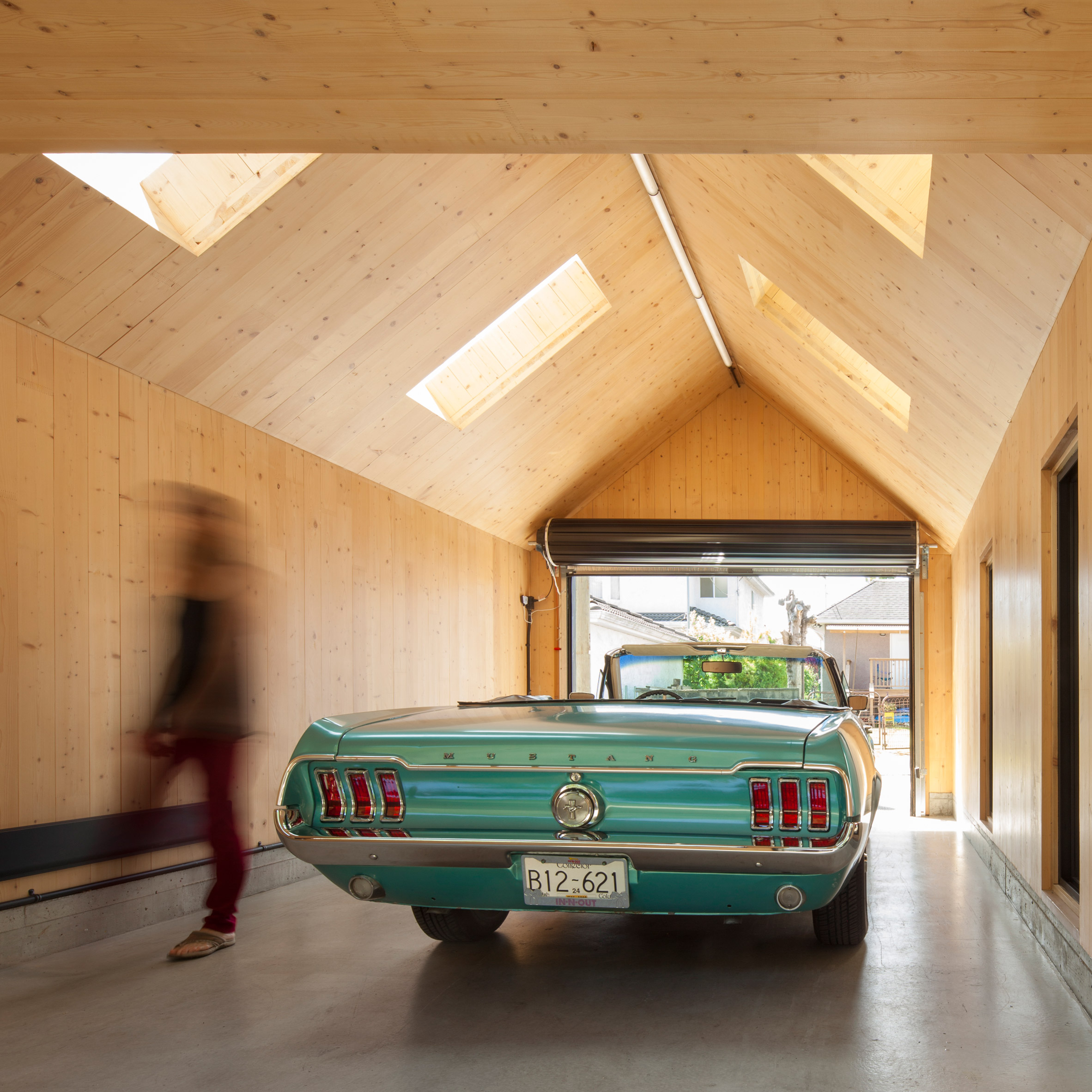 CLT, which is made from layers of timber glued together, provided a way to build quickly and easily, as the site was rather inaccessible and surrounded by other garages and houses.

“The site presented a number of challenges – accessed from a narrow alley with an overhead powerline, limited lay-down area and adjacent structures,” Motiv Architects added. 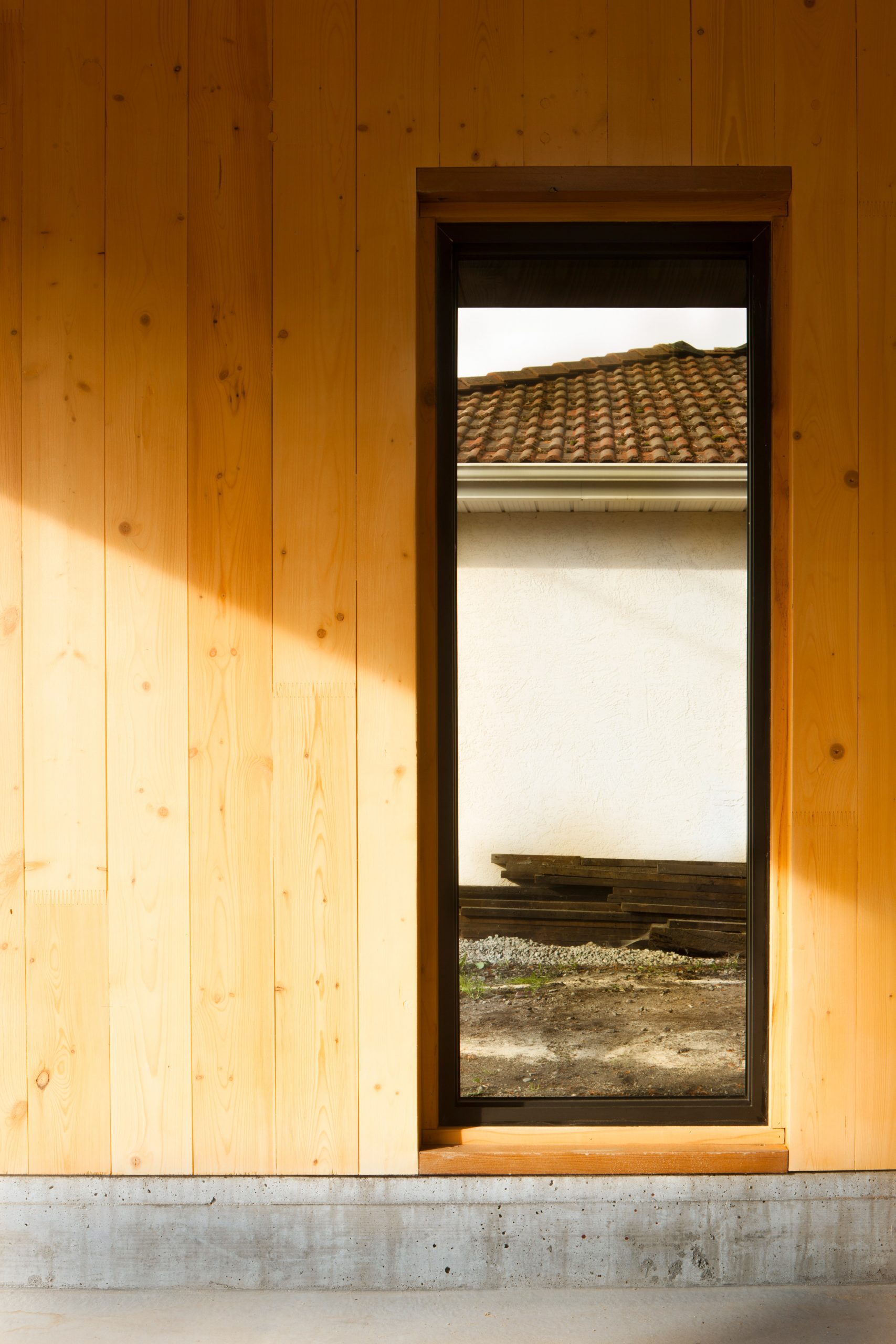 It took under two days to build Eton Accessory Building and it was constructed with a crane known as Hydrauliska Industri AB (HIAB). Black vertical boards and battens of native Western Red Cedar siding clad the exterior for insulation.

“Designed as a kit of parts, the structure is entirely made of three-ply CLT with large cedar framed openings at both ends,” said the studio. “Cut into its component parts by hand as 14 pieces and trucked to Vancouver, the CLT was erected from a HIAB in one-and-a-half days – snapping together like a puzzle.” 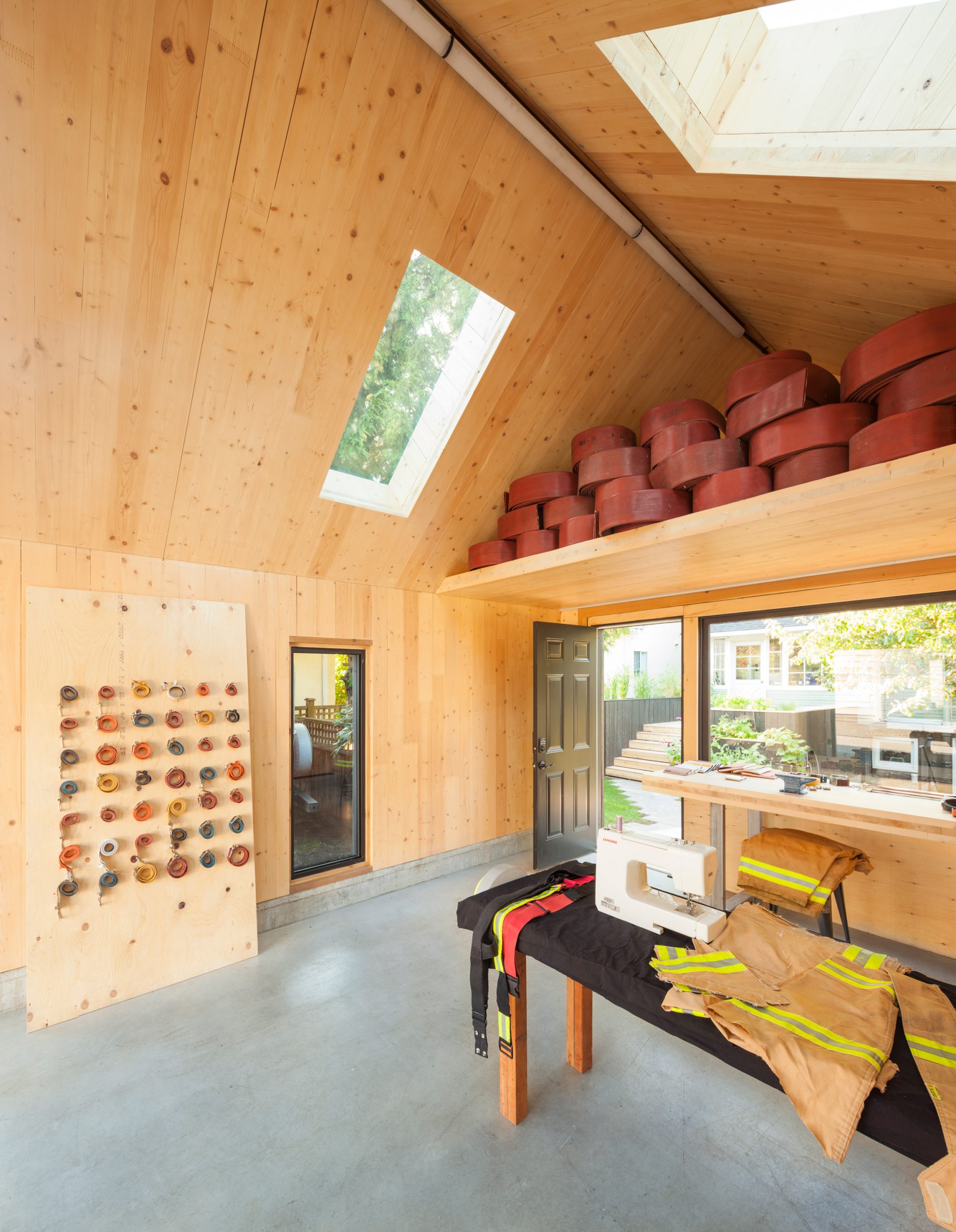 Efforts to maximize the CLT panel size and sturdiness included incorporating a mezzanine inside and adding built-in gutters outside to stiffen the structure.

Inside, the CLT is left exposed to showcase the warmth of the spruce. Four skylights are even placed across the ceiling and align with vertical windows around the exterior. A long window above the desk in the rear also overlooks the garden. 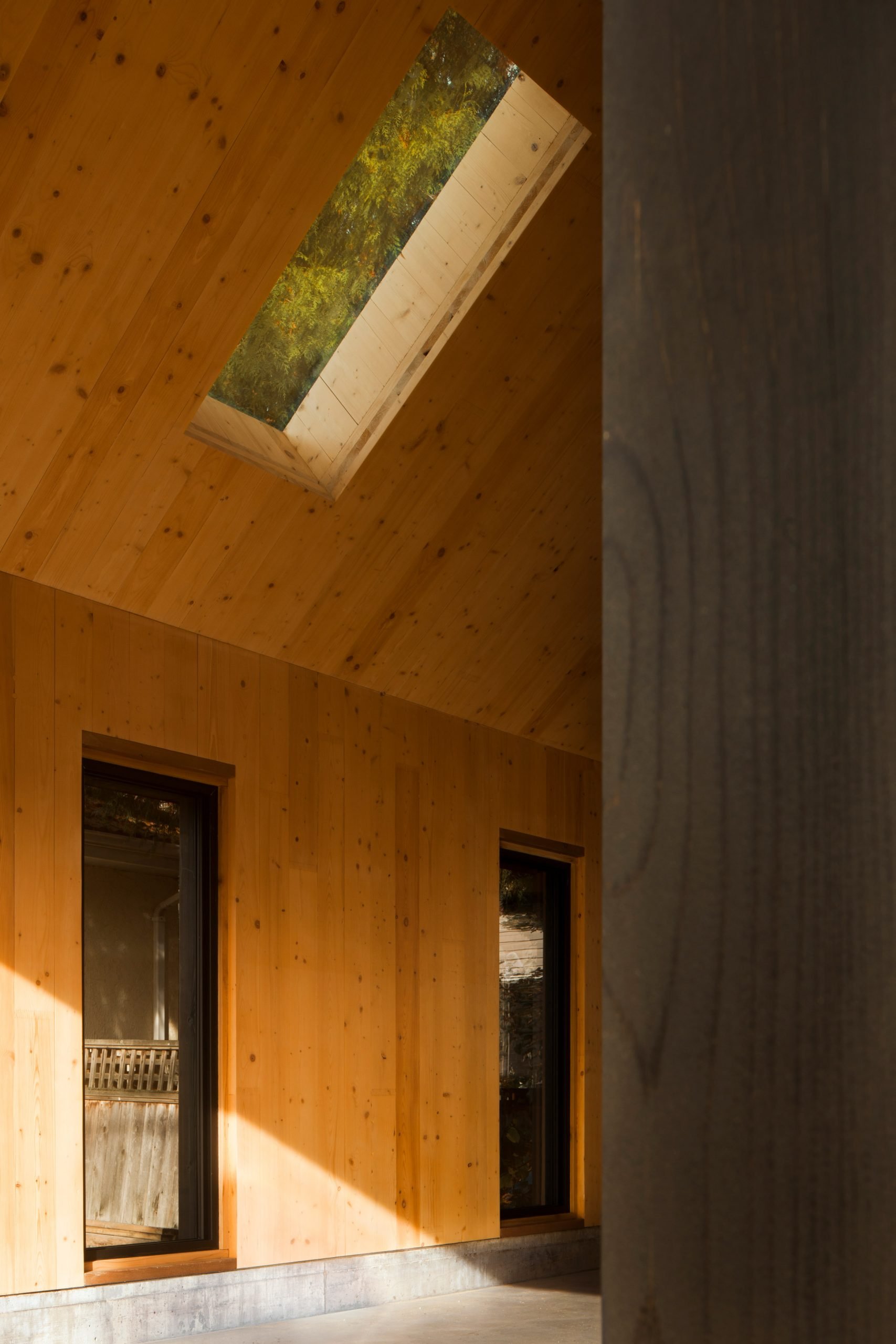 The exterior has an onyx finish for contrast and blends with the dark standing seam metal roof.

“A glowing contrast of interior and exterior is created,” the studio added. “Neighbours come by to see what the latest project is and to admire the woodiness of it all… a gem in the neighbourhood.”

In addition to this garage, another project built on a laneway in Vancouver is Laneway House by Campos Studio, but instead of being for cars, it has a bedroom for a growing family. 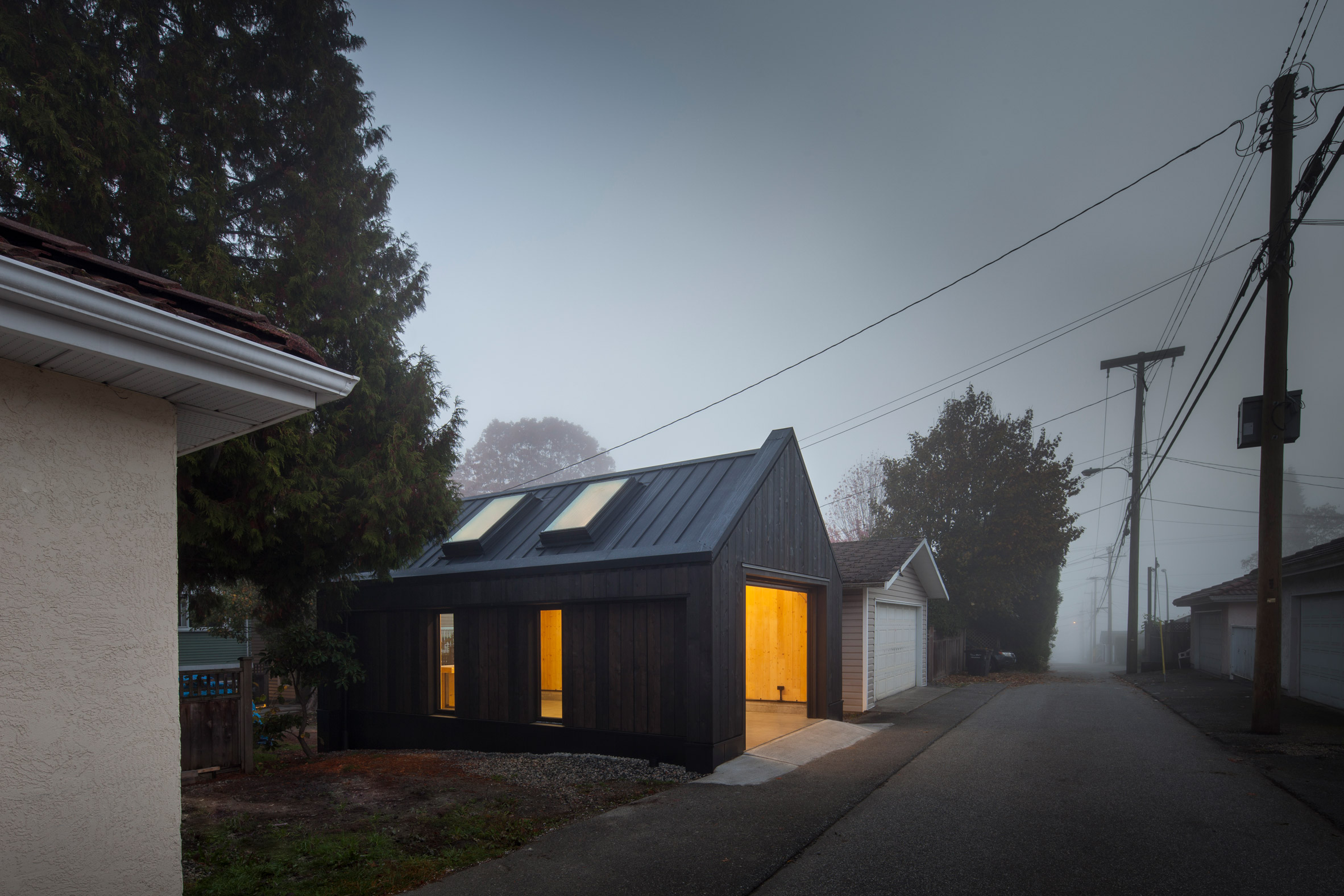 Photography is by Jean-Philippe Delage.