MVRDV’s Rotterdam Rooftop Walk has Opened to the Public


MVRDV’s Rotterdam Rooftop Walk has Opened to the Public

Designed by Rotterdam Rooftop Days and MVRDV, the Rotterdam Rooftop Walk has finally opened to the public. The installation offers visitors a new perspective on the city, with a 30-meter-high aerial bridge that spans across a variety of the city’s rooftops, from the roof of The Bijenkorf department store to the top of the World Trade Centre plinth. The project aims to showcase how rooftops can provide an added layer of public infrastructure in a dense city where public space is scarce. Rotterdam Rooftop Walk is open from May 26 to June 24 from 10:00 to 20:00. 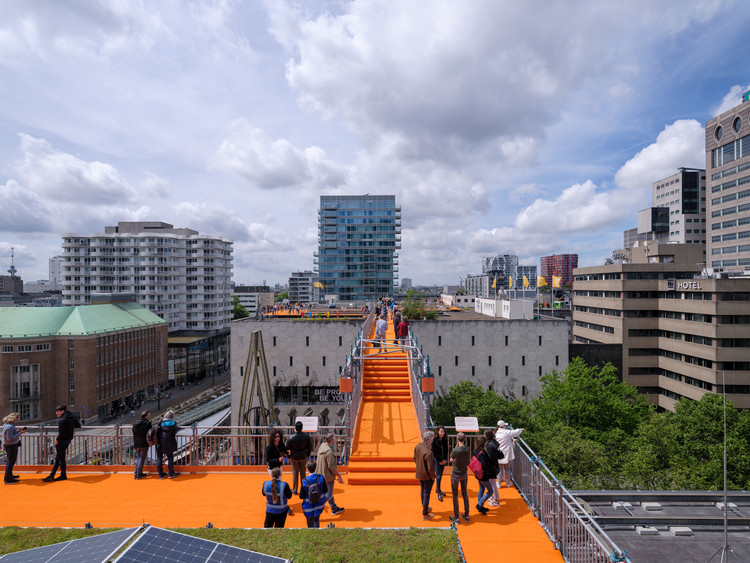 Towards the end of 2021, MVRDV revealed its design for the temporary intervention that takes tourists and city dwellers on a walk across several rooftops in Rotterdam, highlighting an untapped potential for expanding the public realm. The Rotterdam Rooftop Walk begins from the Koopgoot shopping street, from which staircases lead visitors up on a series of rooftop terraces. On these rooftops, NGO’s and private companies are showcasing their innovations and projects related to greening, energy generation, and water storage. The path also provides access to the open patios on top of De Bijenkorf Department Store Complex designed by Marcel Breuer in 1957, from which staircases lead visitors back to ground level.

The extensive programming aims to increase visitors’ awareness of the potential of roofs, which can become a “second layer” that makes the city “more livable, biodiverse, sustainable, and healthy”. Implementing rooftop programs can help shed the light on major environmental and social issues such as climate change, the housing crisis, and the transition to renewable energy. The Rooftop Walk draws attention to these problems, especially in a city like Rotterdam where 18.5 km2 of flat roofs remain unused.

Highlighting an untapped spatial resource, MVRDV has also produced a catalogue of 130 innovative ideas to make use of Rotterdam’s empty flat roofs, showcasing a potential new phase in the city’s development. Commissioned by the City of Rotterdam and developed together with Rotterdam Rooftop Days, the Rooftop Catalogue illustrates how reprogramming rooftops can help with issues such as land scarcity and climate change while also addressing the practical side of repurposing these spaces in terms of construction options and suitable sites.

Earlier this month, MVRDV and Fugger Foundation celebrated the 500th anniversary of the Fuggerei social housing project, the world’s oldest housing complex, with a ceremonial pavilion and three proposals for “Fuggerei of the Future”. The celebration features a 5-week programme of interdisciplinary discussions and events about social housing and current global challenges. In honor of the occasion, MVRDV designed the ‘NEXT500’ pavilion, which exhibits an MVRDV study on the “Fuggerei of the Future”, presenting a new Fuggerei code and three proposals for new Fuggerei complexes around the world.