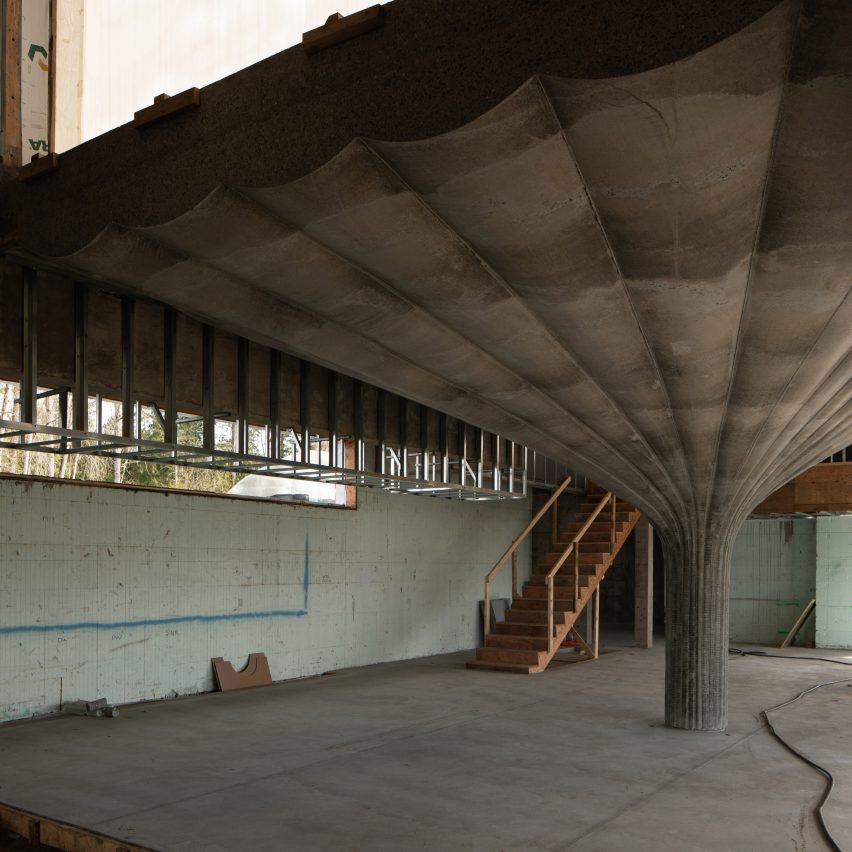 Designer Omer Arbel’s Vancouver studio has made a film documenting the concrete forms of House 75.9, which is being built on a hay farm near Surrey in British Columbia, Canada.

The video shows the partially complete home that is being used as a testbed to continue Arbel’s experiments into the properties of concrete on the scale of a building.

Omer Arbel Office designed the unique home around a series of 10 tree-like concrete forms that reach as high as 10 metres, rising up to become the home’s ceilings.

When the home is complete, a magnolia tree will be planted in each of the concrete forms, with leaves and branches spreading over the roof exterior. 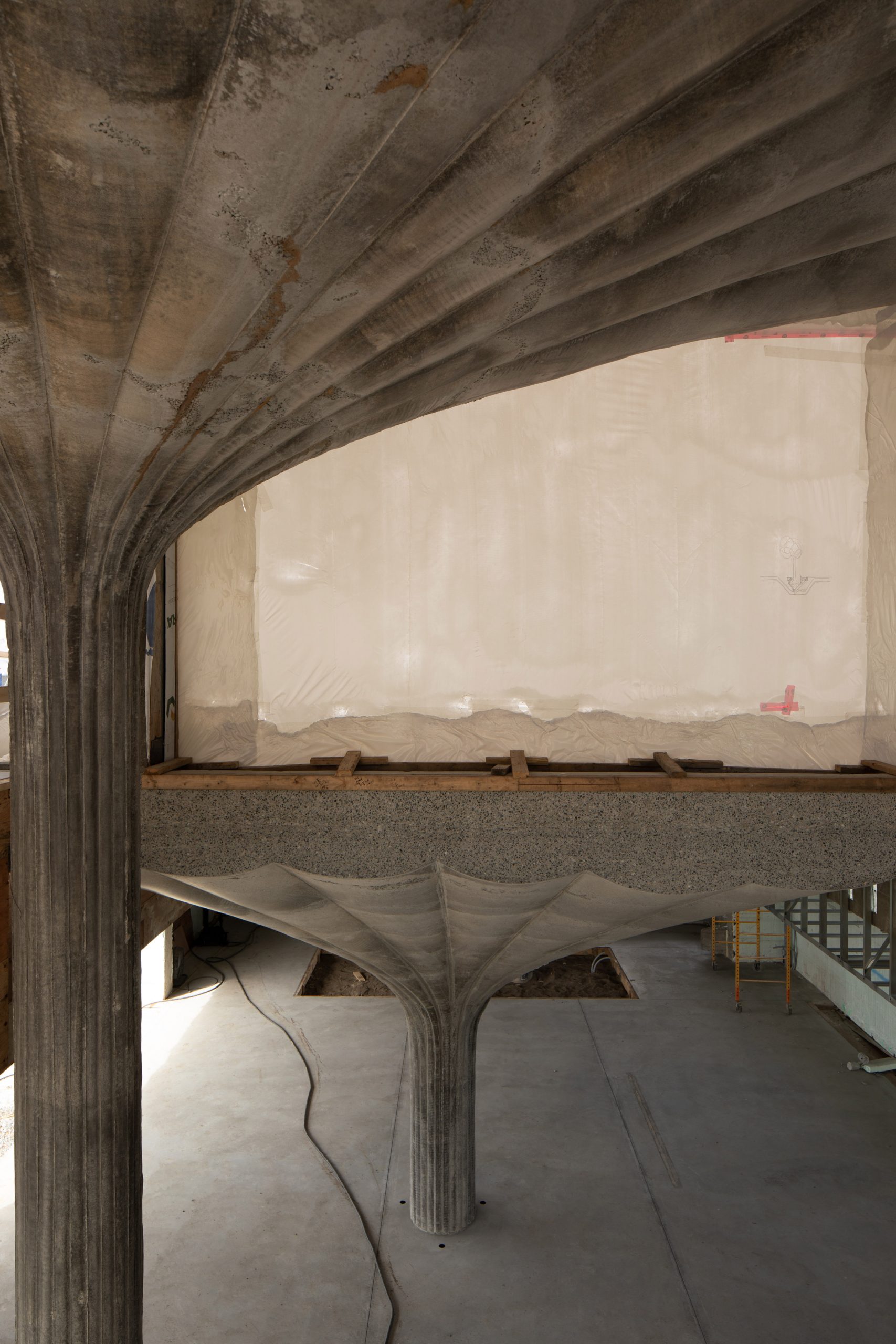 “From a poetic perspective, we decided to consider the concrete trees – with real magnolia trees planted within – as if they were archaeological remains found on site,” Arbel told Dezeen.

“Our goal then was to weave a modernist language of rectilinear volumes around the pieces, creating a domestic pattern of inhabitation on the one hand, and the cinematography of passage over, under, and through the pieces on the other hand.” 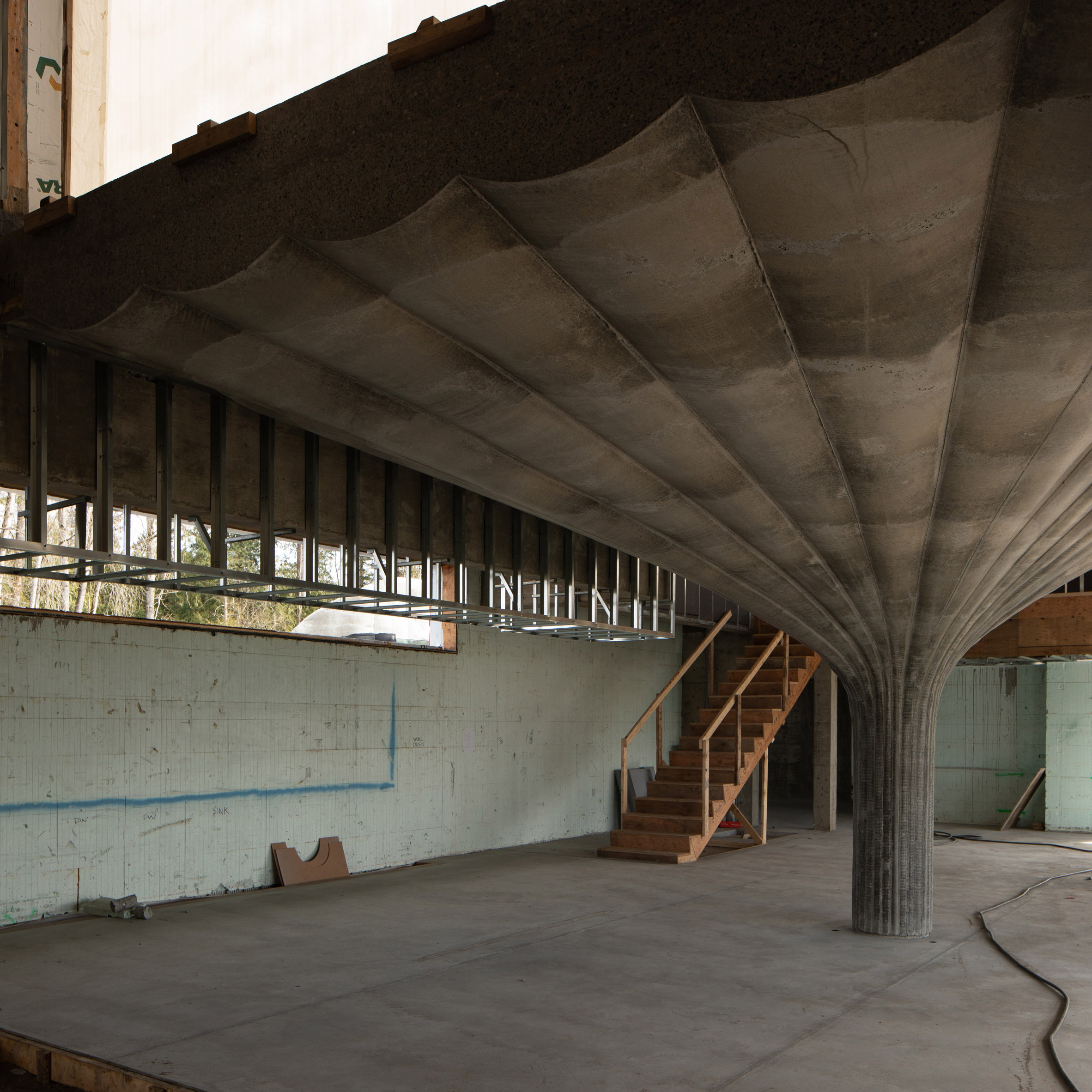 The studio created the film, which will be shown as part of an upcoming exhibition of its work at Aedes Architekturforum in Berlin, to showcase the home’s concrete structure in its raw form.

“There is a certain lack of points of reference to a construction site that I love – before elements such as window frames and handrails come in,” said Arbel.

“It is at this stage that the work is most suggestive, most open-ended, most elemental, most ambiguous.” 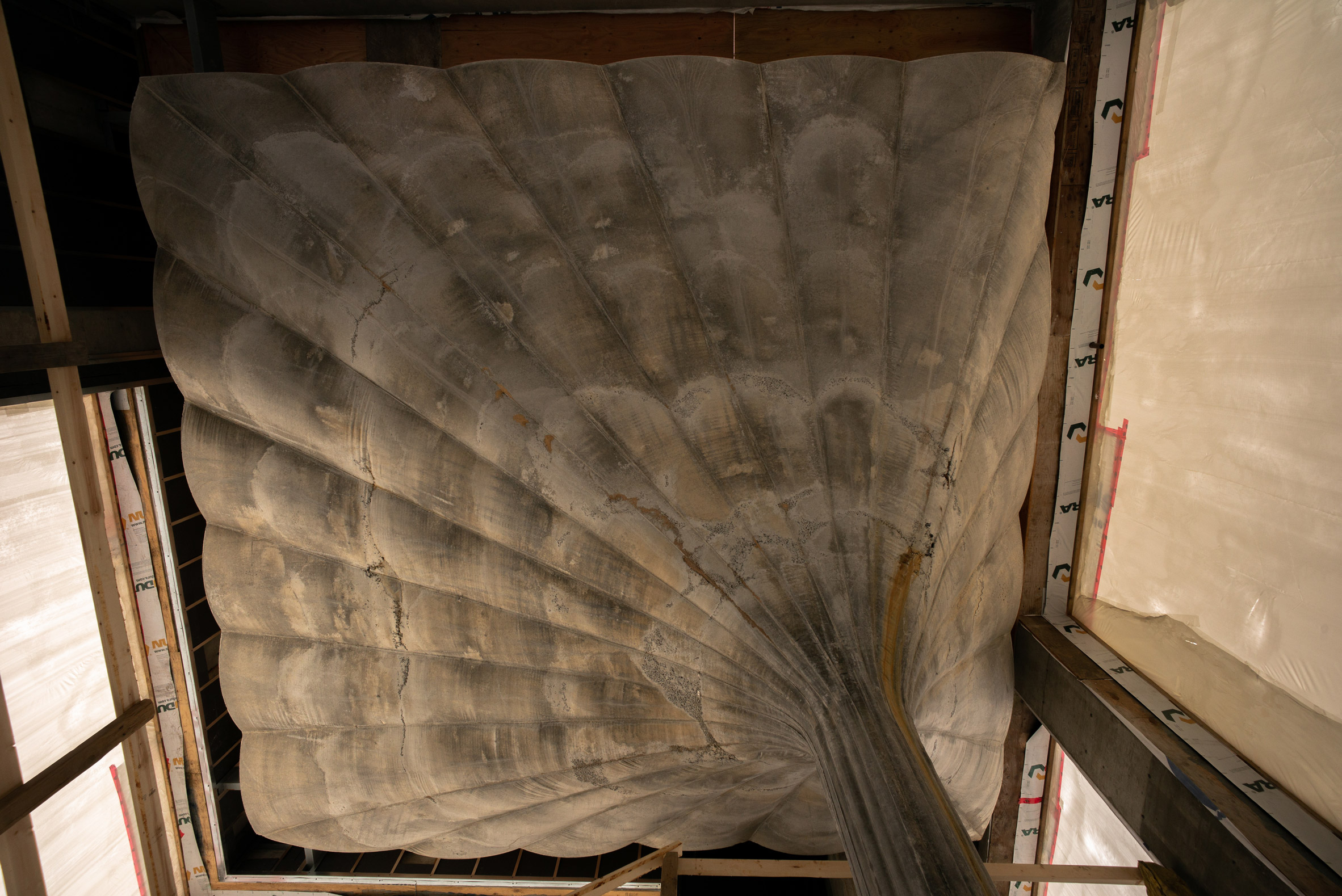 “Very soon this will be a house, with sofas and breakfast and laundry and kids running around, and that will be amazing, in its way, superimposed against these monumental shapes,” he continued.

“But before then, there is a short window of time in which the pieces are completely abstract. It is this window of time I wanted to capture in the video.” 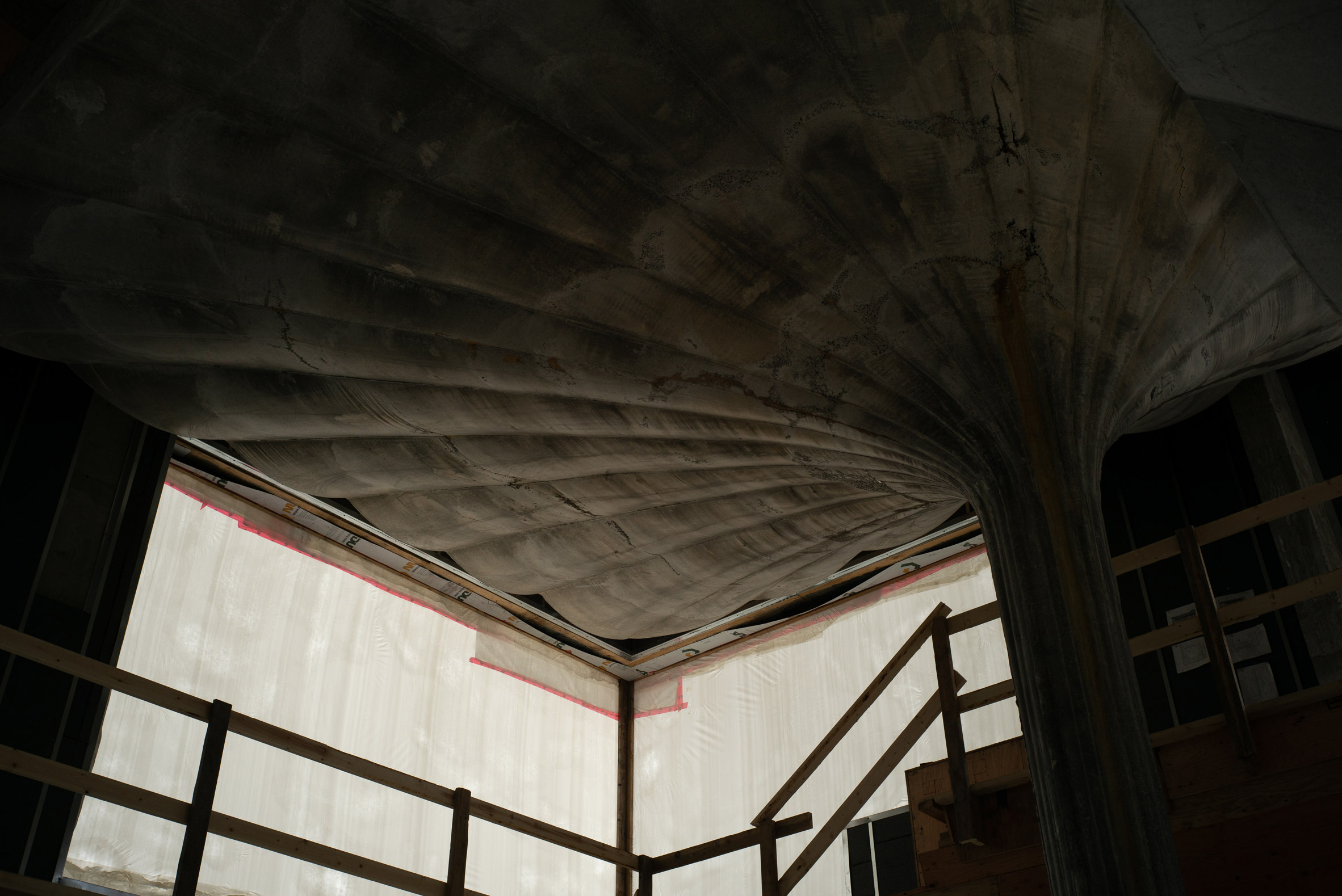 The house’s tree-like structures were created using an experimental method of pouring concrete that combined fabric formwork and plywood ribs.

“We are investigating ways of working with concrete that acknowledge the material’s plasticity,” said Arbel.

“In the case of 75.9, we’ve developed a system of plywood ribs that hold together tough geotextile fabric. When filled with concrete, the fabric responds to hydrostatic pressure and swells to make what we consider a beautiful form, a sort of reverse trumpet with a hollow cone at the top, into which we plan to transplant mature trees.” 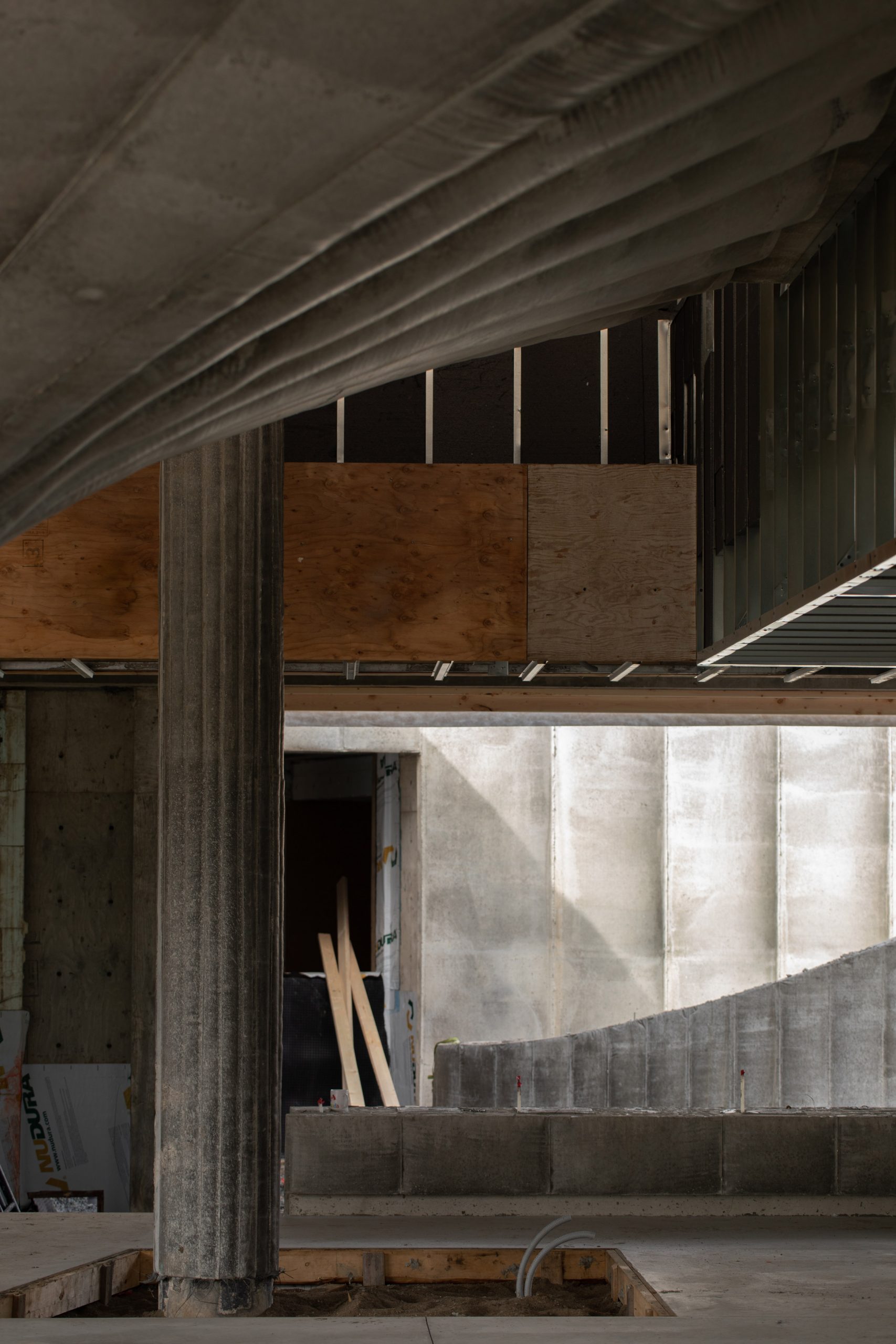 To create the structures, Omer Arbel Office’s developed a method of pouring concrete that would allow the forms to strengthen as they were created so that they could support themselves.

“Because the formwork is made of fabric, we must cast each column in one continuous pour,” explained Arbel.

“We worked with our structural engineers on a concrete formula which has the concrete curing throughout the duration of one very slow, durational pour, such that the curing rate follows along behind the pour rate, and the piece gains structural integrity at the stem in progress and is thus able to support subsequent concrete entering the system.” 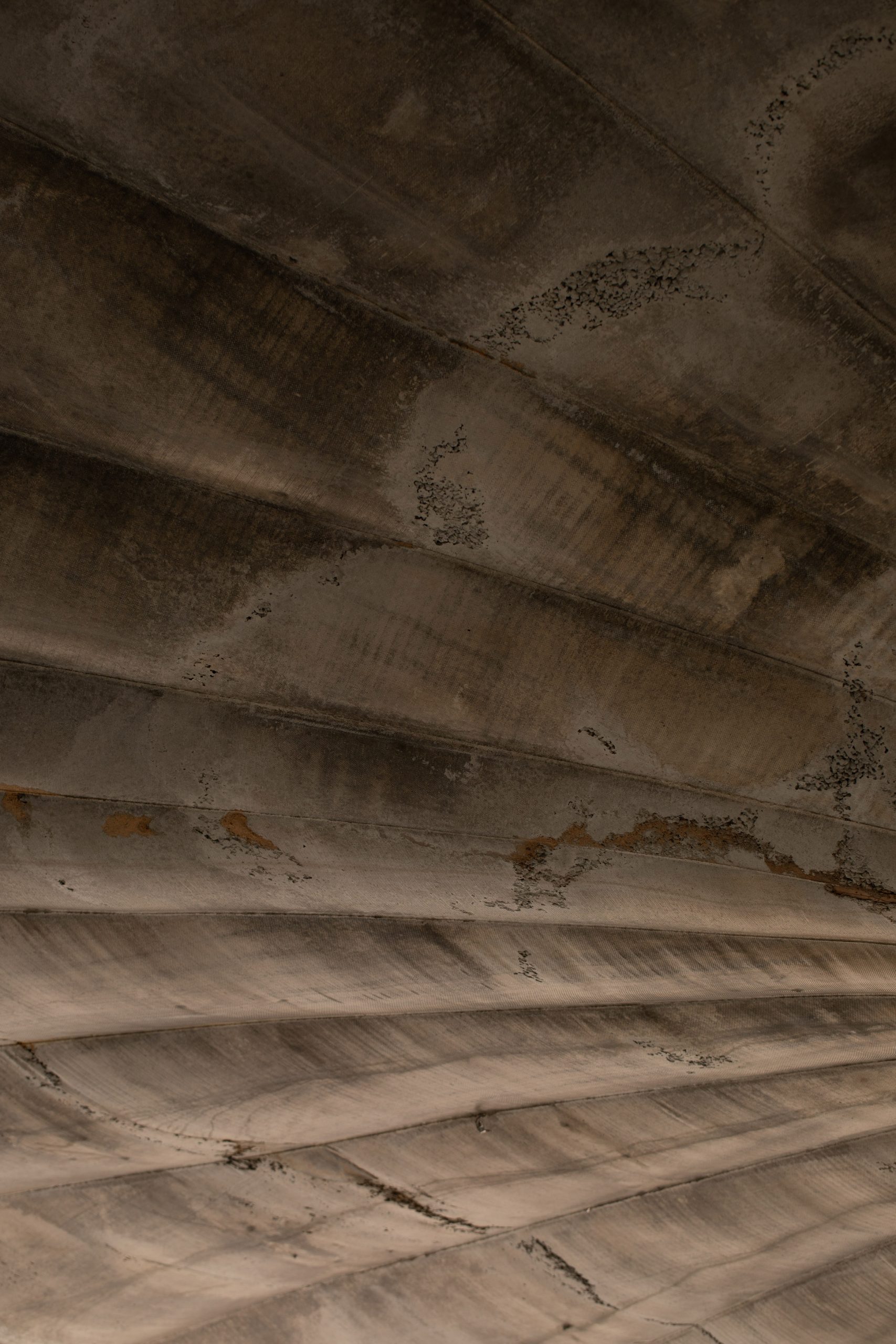 Placed throughout the elongated house, the larger trees will shelter the home’s biggest rooms including its dining and seating area and the gym, while the smaller trees will be in smaller rooms like the tv room, bathroom and a bedroom.

The rooms will be enclosed by traditionally constructed walls with curved forms projecting from them into the surrounding landscape. 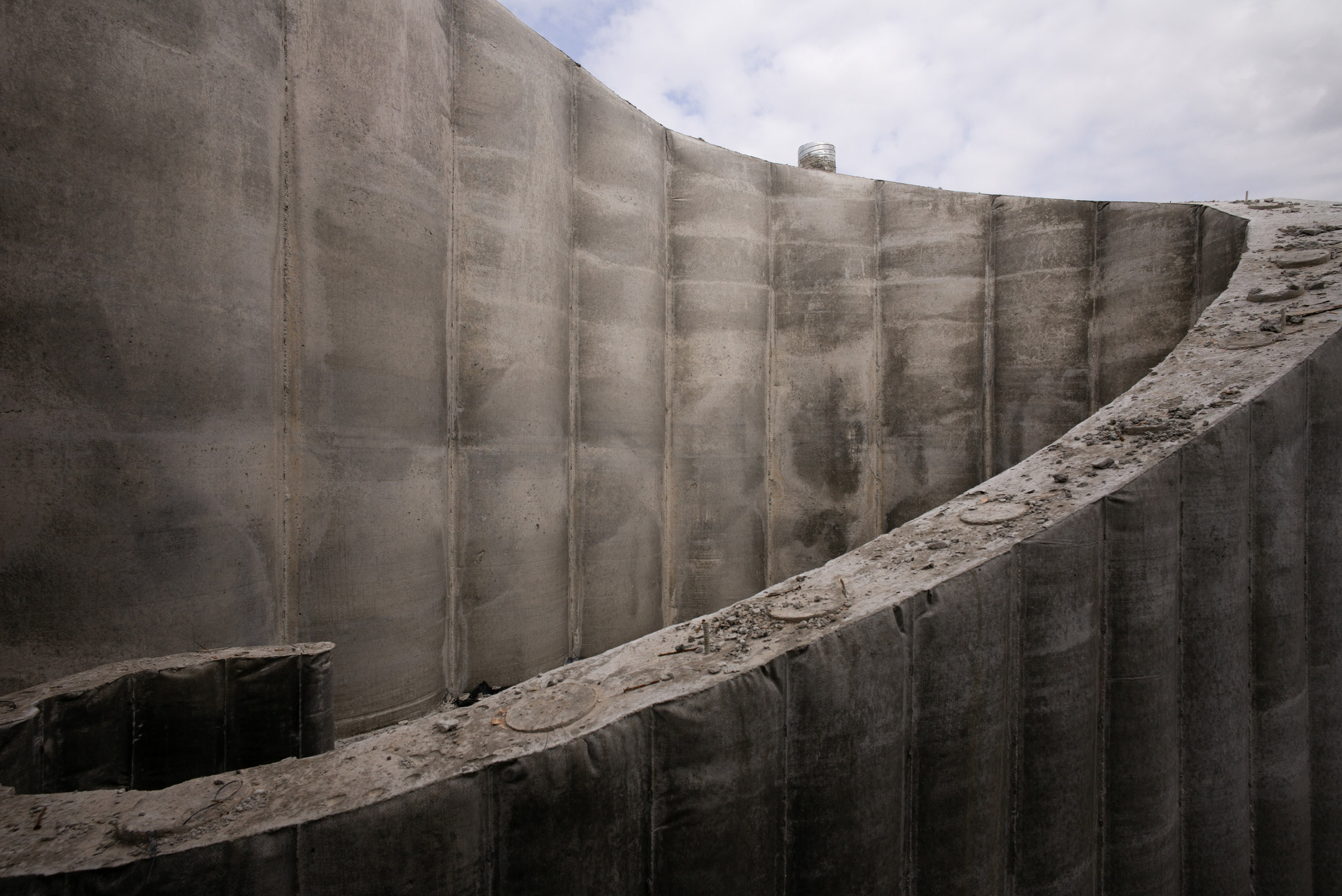 Vancouver based Omer Arbel Office was established by Arbel, who is creative director at Canadian manufacturing and design brand Bocci,  in 2005. The designed and sculptor previous presented a series of slices taken from a concrete column cast inside a flexible fabric mould at Particles for the Built World exhibition.

Speaking to Architectureeditor-in-chief Marcus Fairs during the exhibition Arbel was critical of how concrete buildings are typically created.

“When we build things out of concrete, typically we build first out of wood,” he pointed out.

“My critique of this process is that it’s not only very expensive, slow and labour intensive, it’s also dishonest to the material because the fluidity and plasticity of concrete isn’t in the least bit evident in the final piece that you see.”

Photography is by Fahim Kassam.