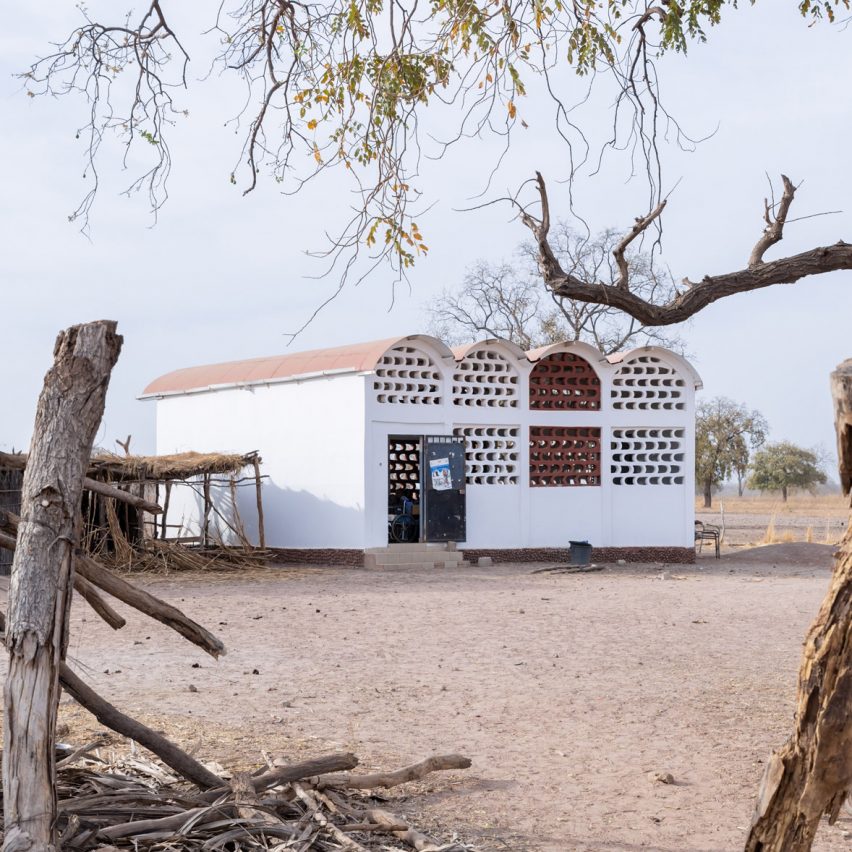 Swiss studio Manuel Herz Architects has designed a brick facade for a hospital in eastern Senegal that has been turned into a school by local contractor Magueye Ba.

The school, in a village south of the city of Tambacounda in eastern Senegal, is enclosed by a series of facades that were created as tests for a hospital that Manuel Herz Architects is designing in the city for the Josef and Anni Albers Foundation. 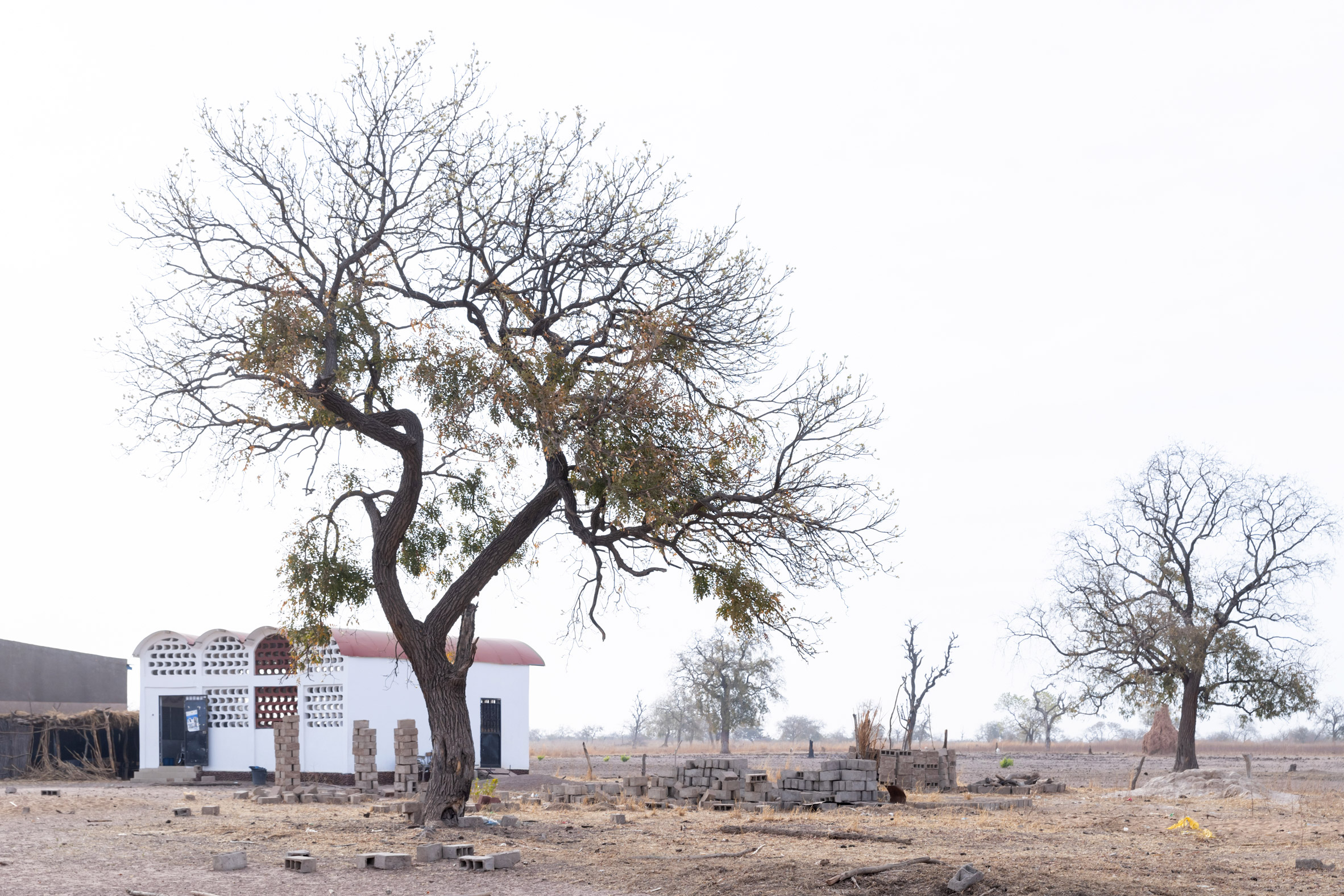 The building began as part of Manuel Herz Architects’ research for its hospital project to examine how the bricks structures function in the local climate. As part of the process, the studio instructed local contractor Ba to create a full-size mock-up of the facades.

Rather than create a standalone facade that would be demolished after testing, Ba – a medical doctor who is a long-time collaborator of the Josef and Anni Albers Foundation and local charity Le Korsa – decided to expand the remit and build a small school. 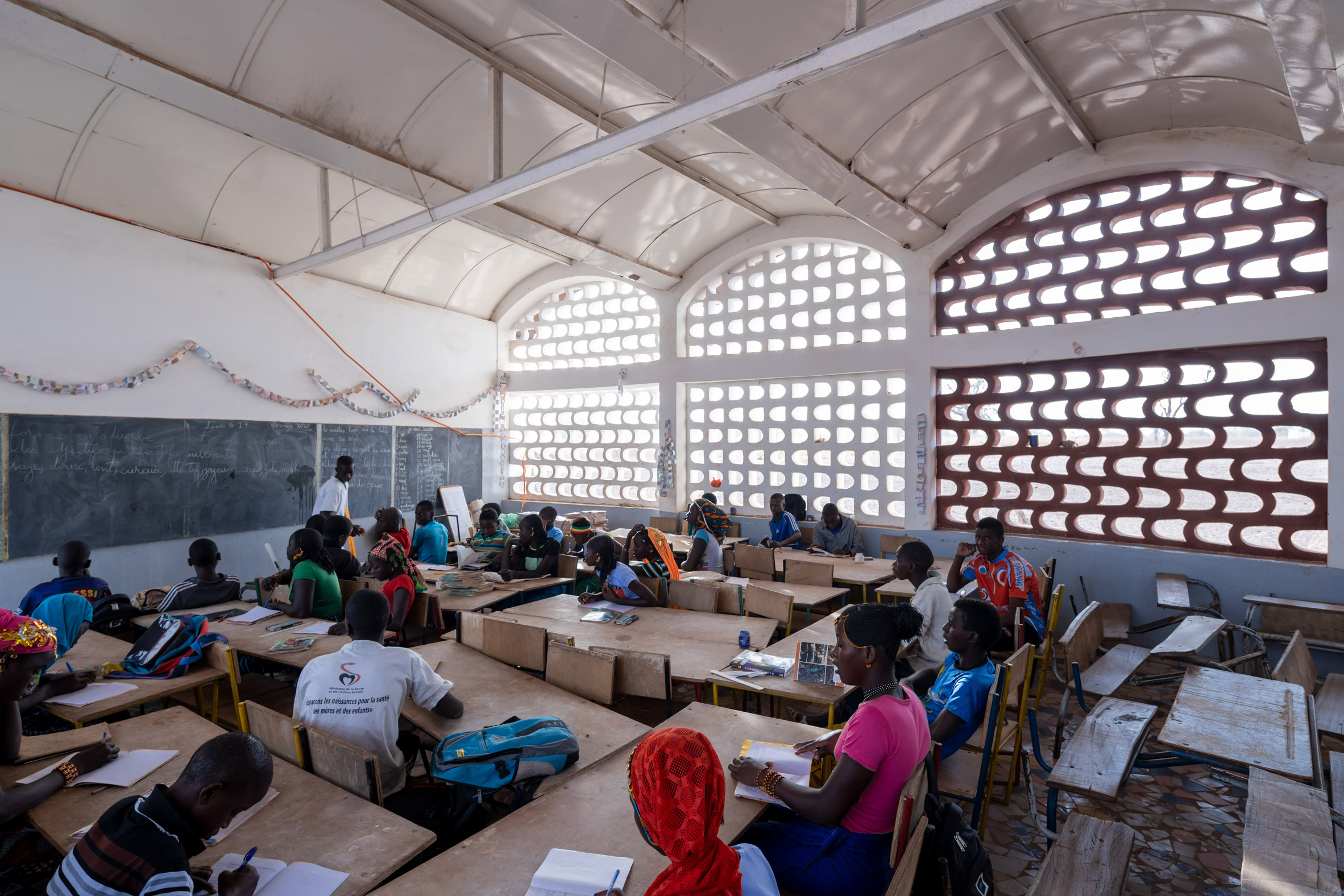 “Knowing that a small village, approximately an hour south of Tambacounda, needed a school, he constructed the test-facade in that village and extended it into a school,” he told Dezeen. 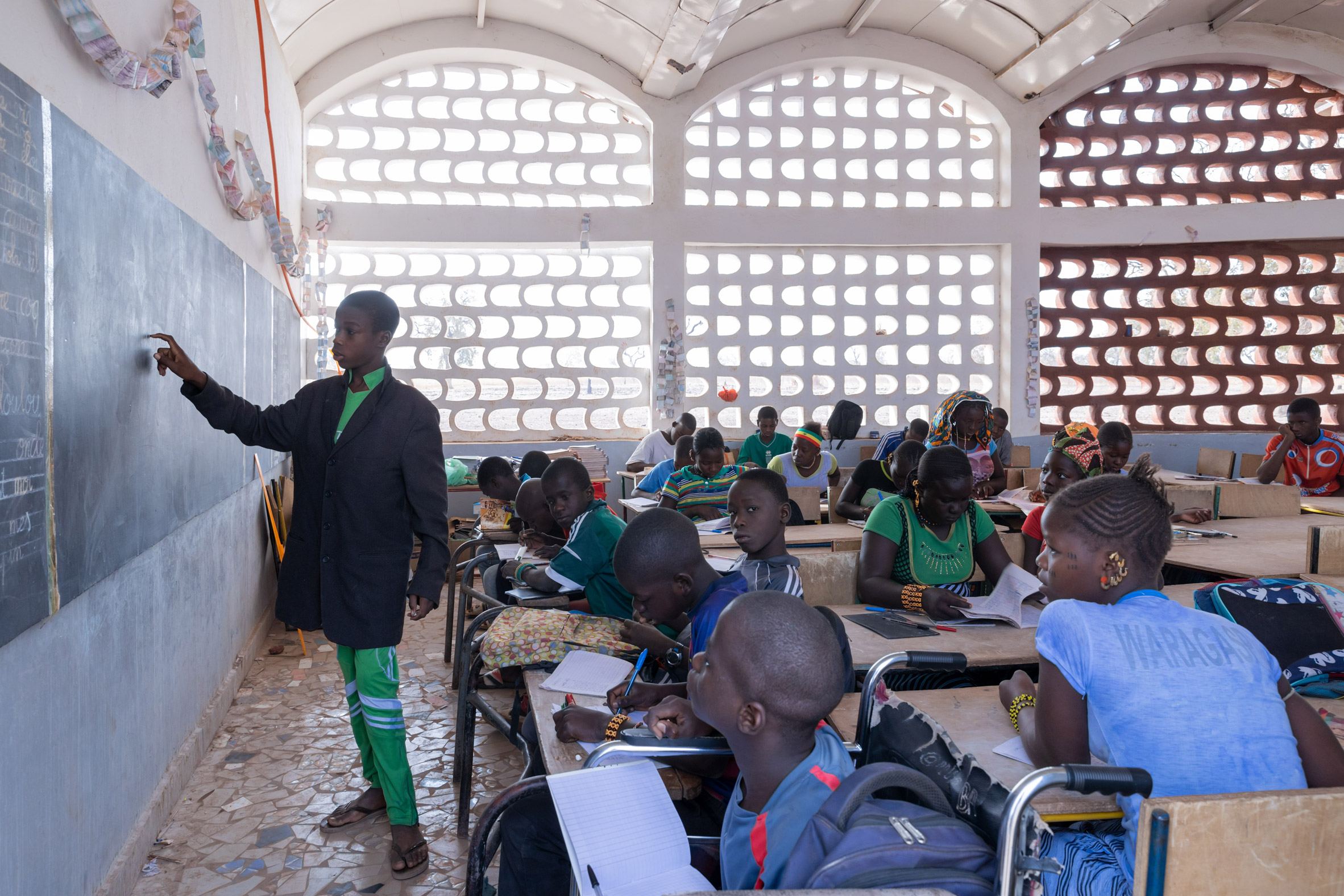 “It translates the Western logic of a test-facade – that would have otherwise not served any additional purpose after observing it for a short moment – into ‘local logic’ where resources are precious,” continued Herz.

“It took us by surprise, but I think there is an incredible cunningness and intelligence to the move.” 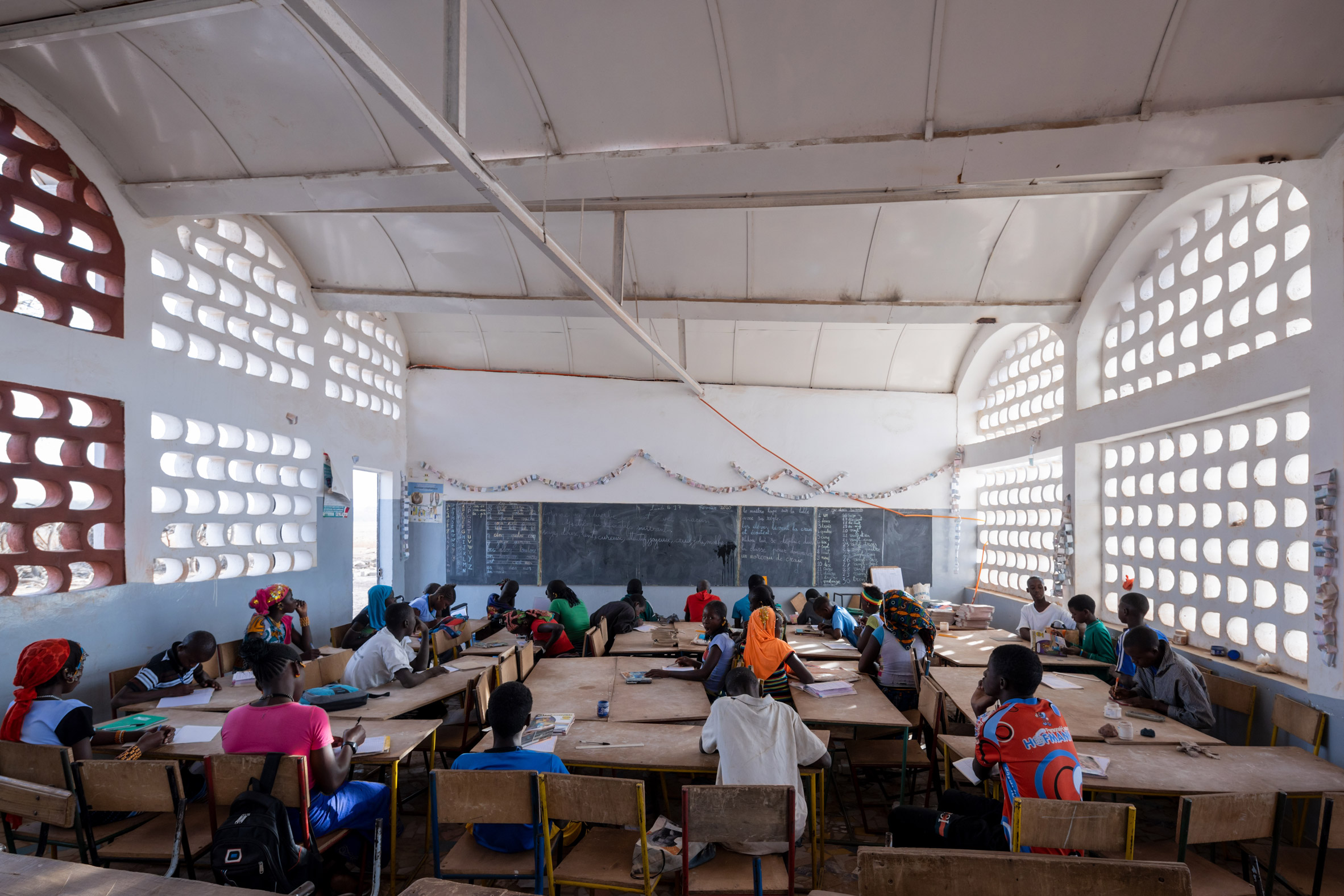 The architecture studio designed the perforated brick facades for the hospital and its circulation spaces as it wanted to create a building that could moderate its own climate without the need for air-conditioning.

These aims translated into the small school, which is built from two walls each made from four brick panels, connected by a barrel-vaulted roof. 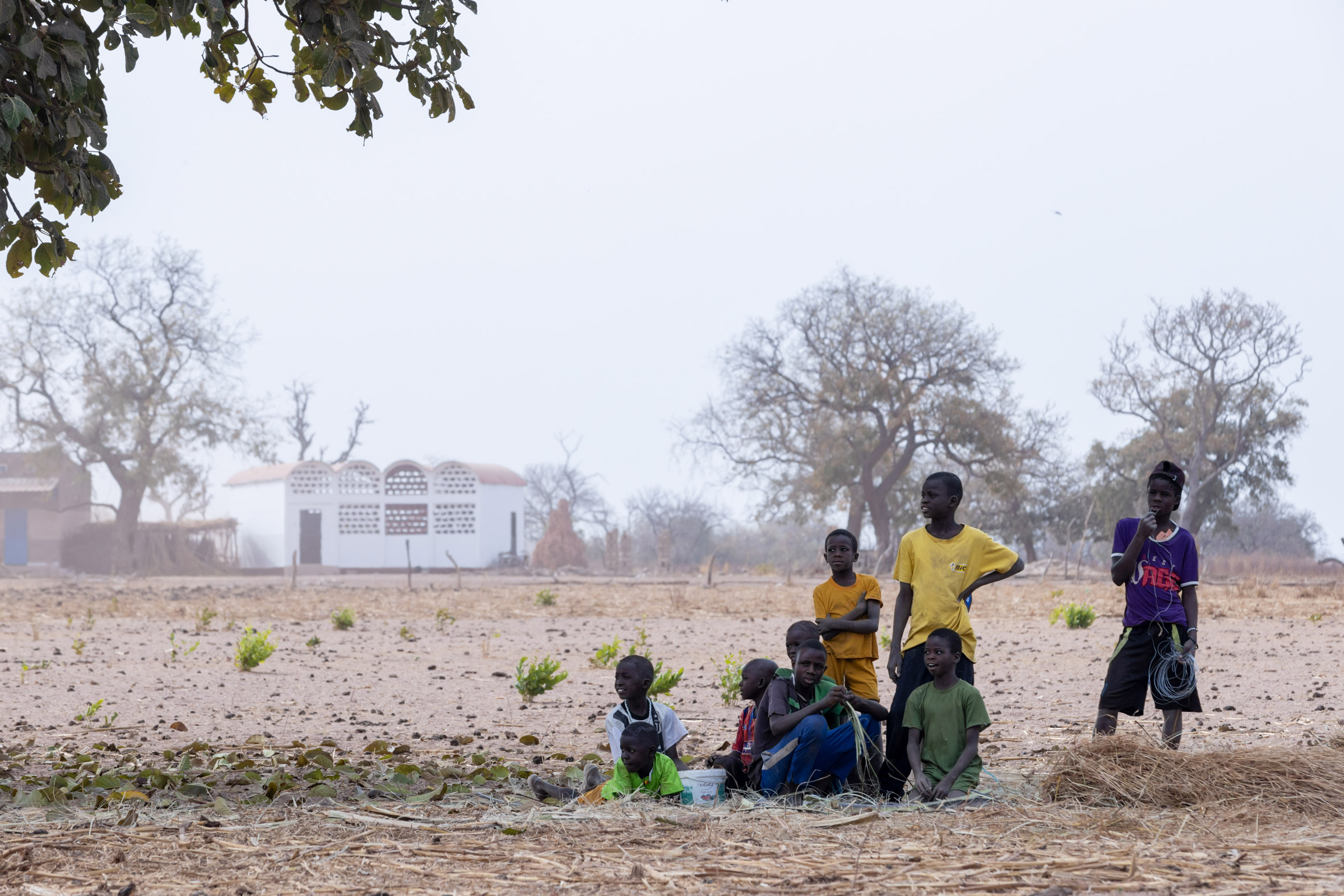 “I had the chance of visiting the school twice – once during the rainy season and once during the dry season – since its completion and each time saw it in use,” said Herz.

“Compared to other village schools, it has much better ventilation, much better light and a lower temperature within the room. Ventilation is extremely important for eastern Senegal, as temperatures easily reach more than 40 degrees Celsius during the dry season and we need to make sure that the hot air doesn’t get trapped in the space.”

At the school, three variants of the perforated facade were tested, with six panels whitewashed and two coated in iron oxide. The results of the testing will now be incorporated into the hospital project.

“We were very happy with the results,” said Herz. “The test-facade-turned-school allowed us to finalize the geometry of the brick, to improve the ratio of open versus closed parts of each brick, and to see how the bricks perform in the rainy season,” he continued.

“We were also able to improve the process of brick production and curing.”

Herz also took away a personal lesson in utilising resources to their fullest potential from the process.

“I learned a lot from this small test-facade-school,” he said. “Even if that is maybe stating the obvious: we become aware of the waste of resources, that happens so much in buildings and construction process in the western world. And we can observe the potential for hybrid-use, and hybrid-design with the school.”

Manuel Herz Architects is a Swiss studio led by Herz that has offices in Basel, Switzerland as well as Cologne, Germany. The studio previously completed a housing block in Zurich, which has dynamic facades that transform into balconies.

Photography is by Iwan Baan unless stated.