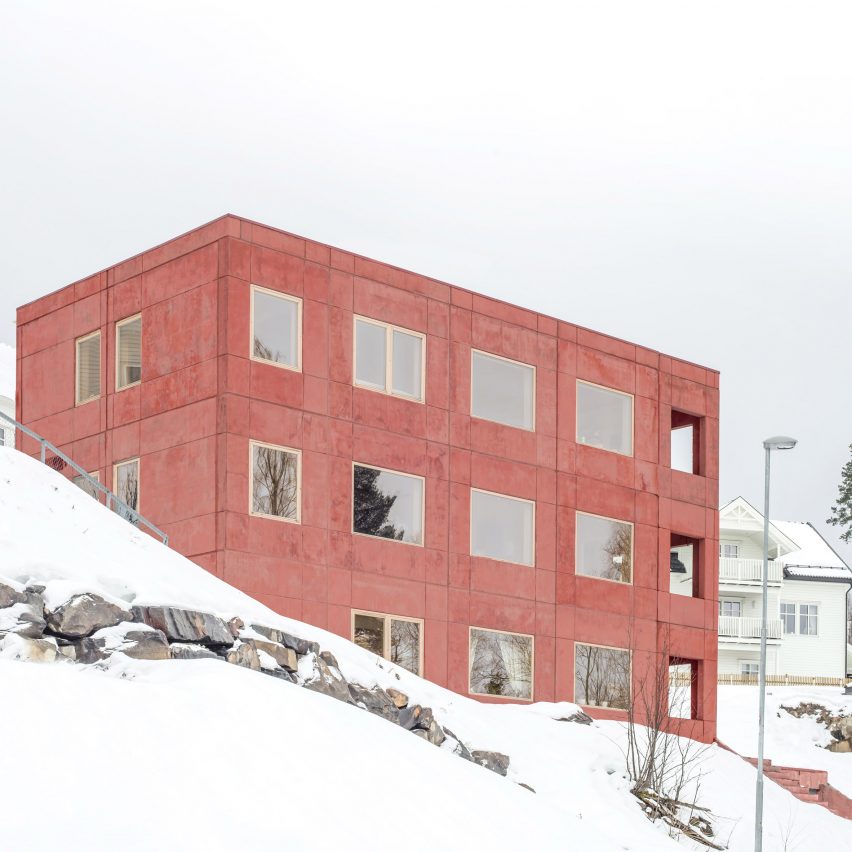 Oslo architecture studio Sanden+Hodnekvam Arkitekter has designed a house from prefabricated concrete panels in Norway for a three-generational family that took part in its construction.

Sanden+Hodnekvam Arkitekter’s House in Red Concrete in the town of in Lillehammer was built with a facade made from repetitive, insulated-concrete elements in order to help keep costs down. 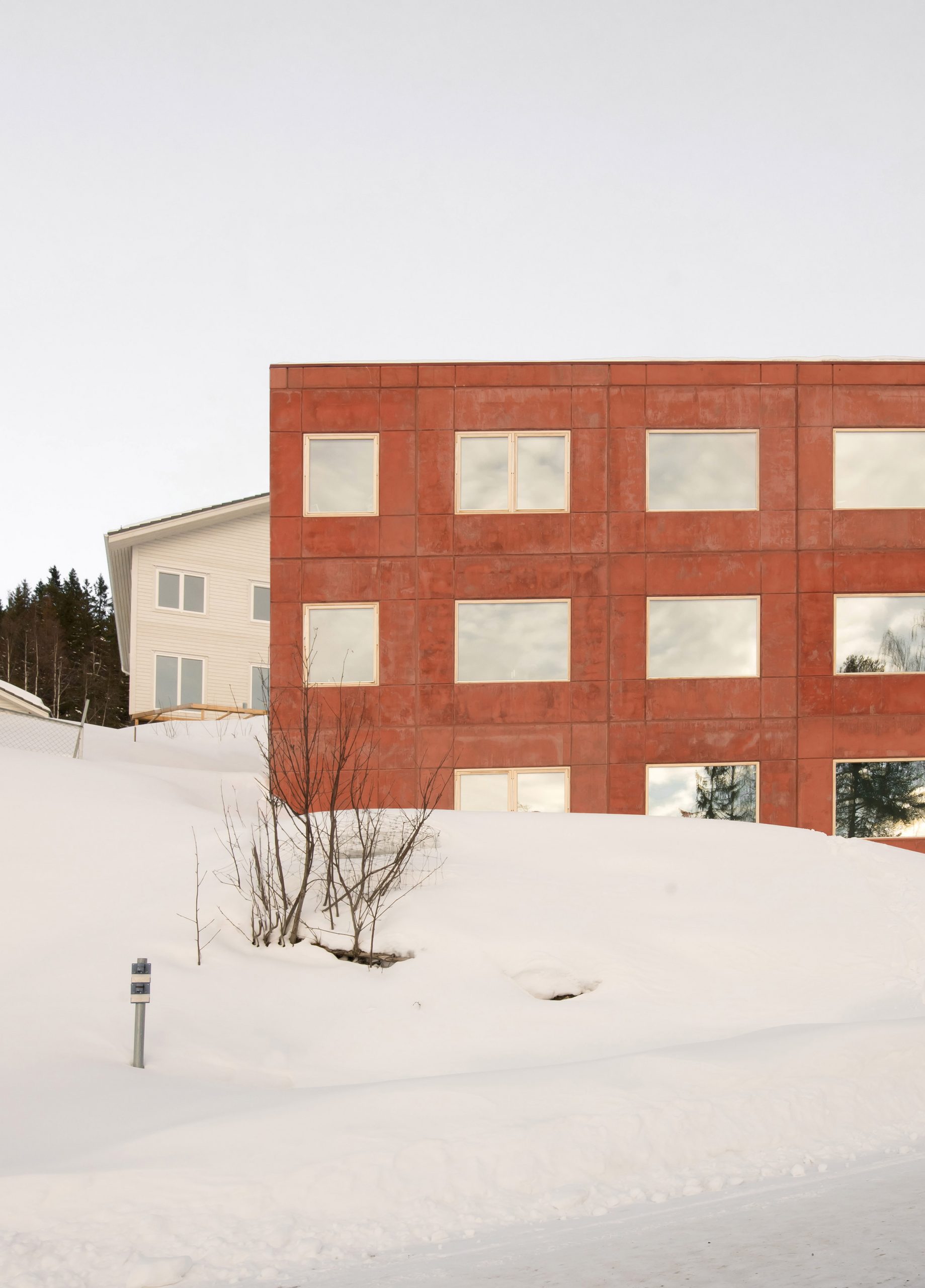 “The repetitive facade made it possible to use the same casting for the concrete elements many times,” co-founder John Sanden told Dezeen.

“The cost is really low, which was possible because of the simple construction system, the repetitiveness and the work done by the client themselves.” 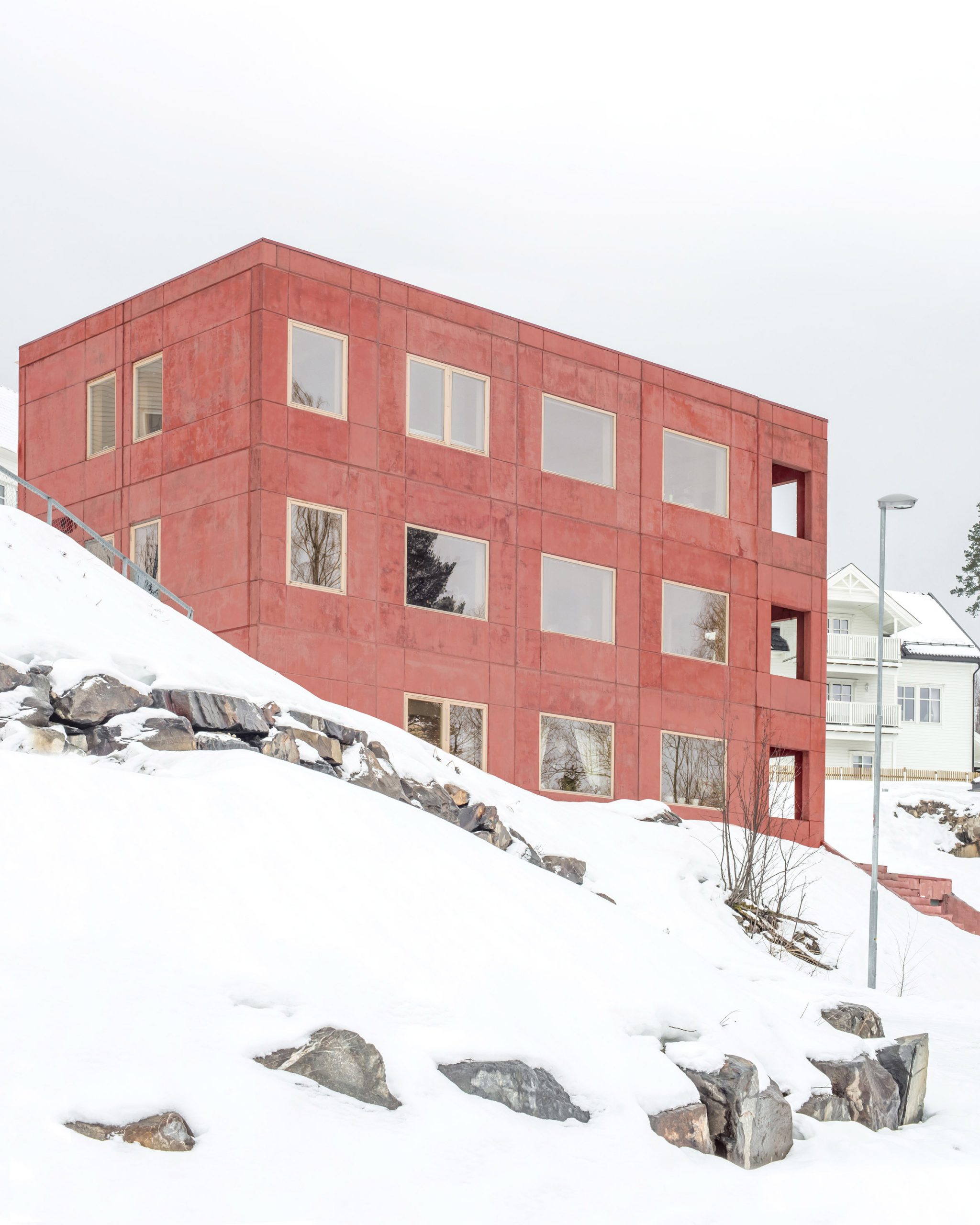 To keep the project affordable, Sanden + Hodnekvam chose to use prefabricated, insulated concrete elements with a 50-millimetre outer layer of pigmented concrete for all the facades.

The studio also designed the house so that no inner walls are load-bearing. This was to save money in the future as it means the house can be adapted to the client’s changing needs but also meant the owners could help build the house themselves. 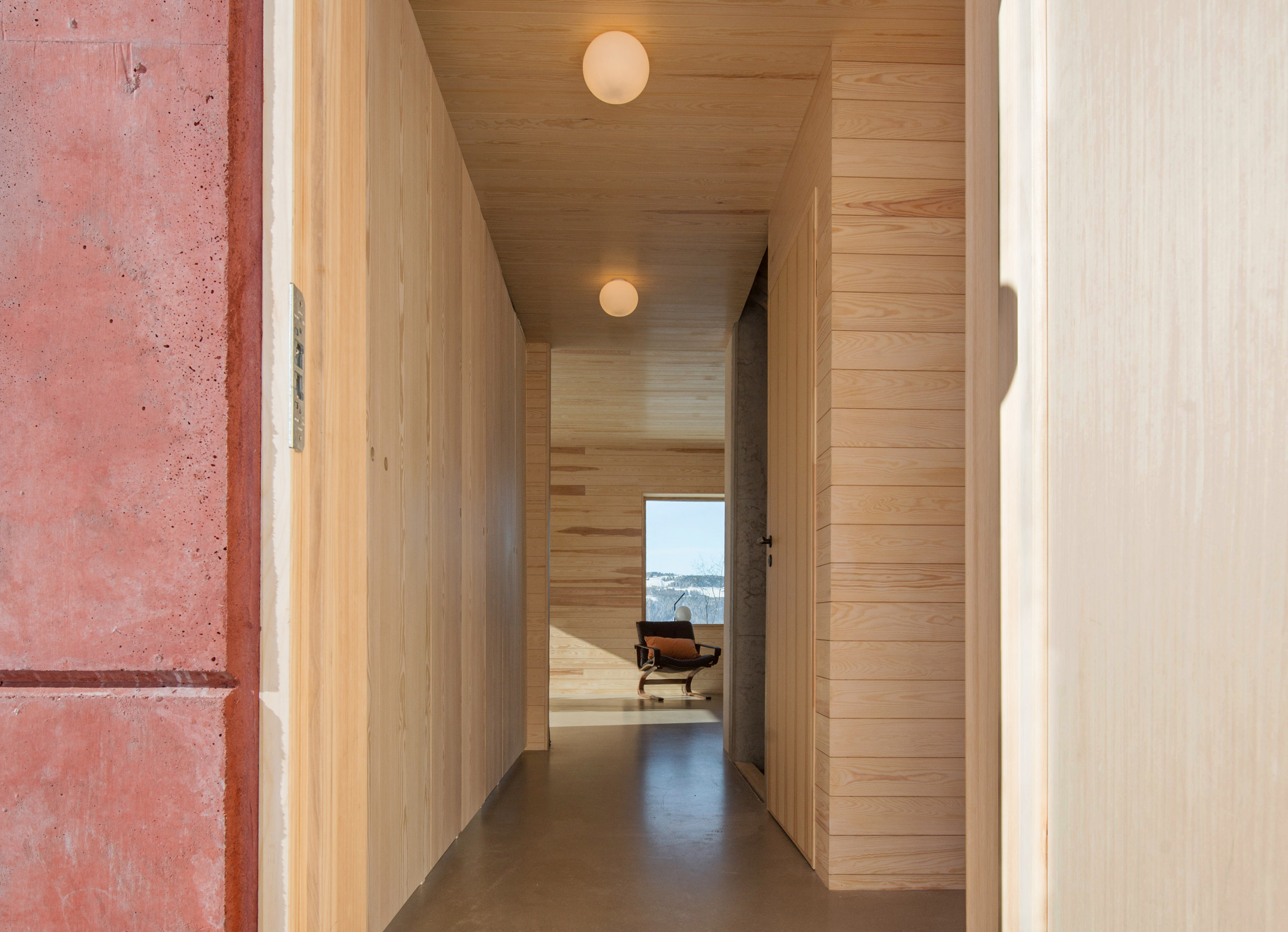 “After the load-bearing part of the construction was in place, the clients have put up inner walls and finished large parts of the remaining work themselves,” the studio said.

“This gave them a deeper understanding of the building, and it made them really love the house already long before they moved in,” Sanden added. 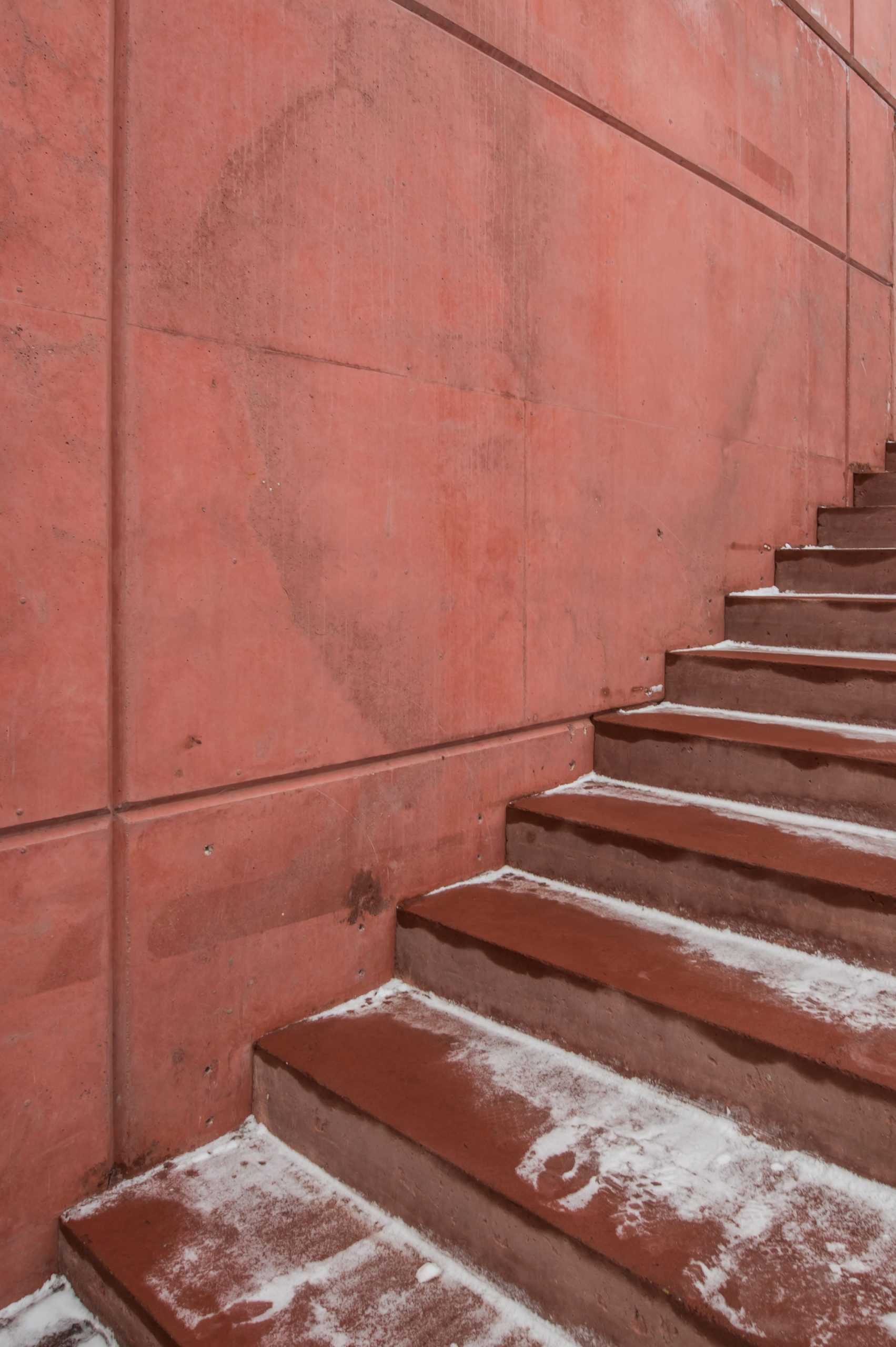 As the house was built on a sloping site, with a height difference of about 10 metres across it, Sanden+Hodnekvam Arkitekter dug it into the hilldside and aligned it at a diagonal angle to the fall of the terrain to create outdoor spaces and improves its views.

“A large part of the house is dug into the hillside in order to fit the programme to the compact site, and at the same time follow height regulations and maximise the view,” the studio said. 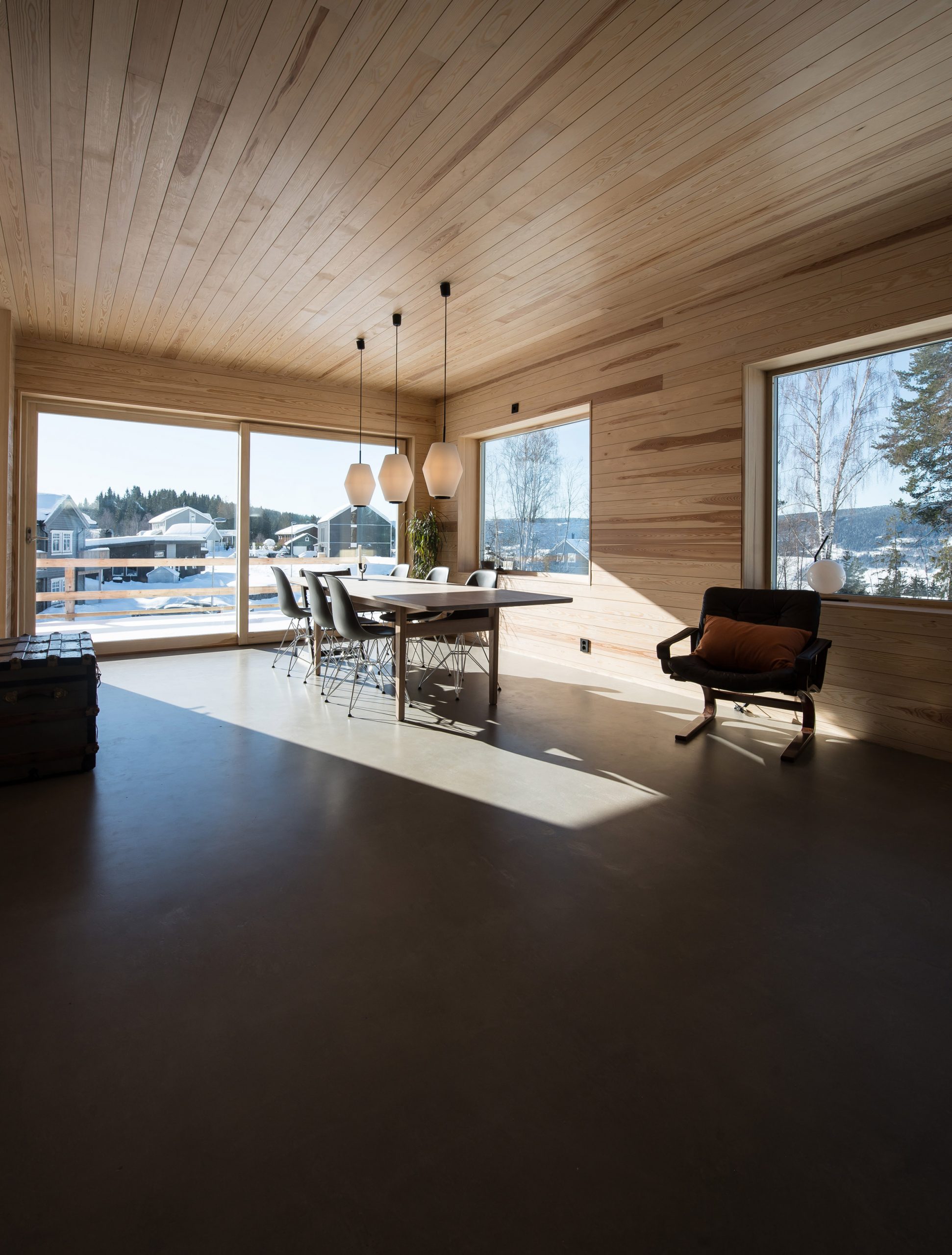 The distinct red colour of the exterior was achieved by adding iron oxide to the concrete mix. “The pigment gives the house a different appearance than the grey, which gives the house its own character,” Sanden said.

“The pigment, along with the wooden windows and the geometric pattern between the concrete elements, makes the building stand out as something different than just a concrete box.” 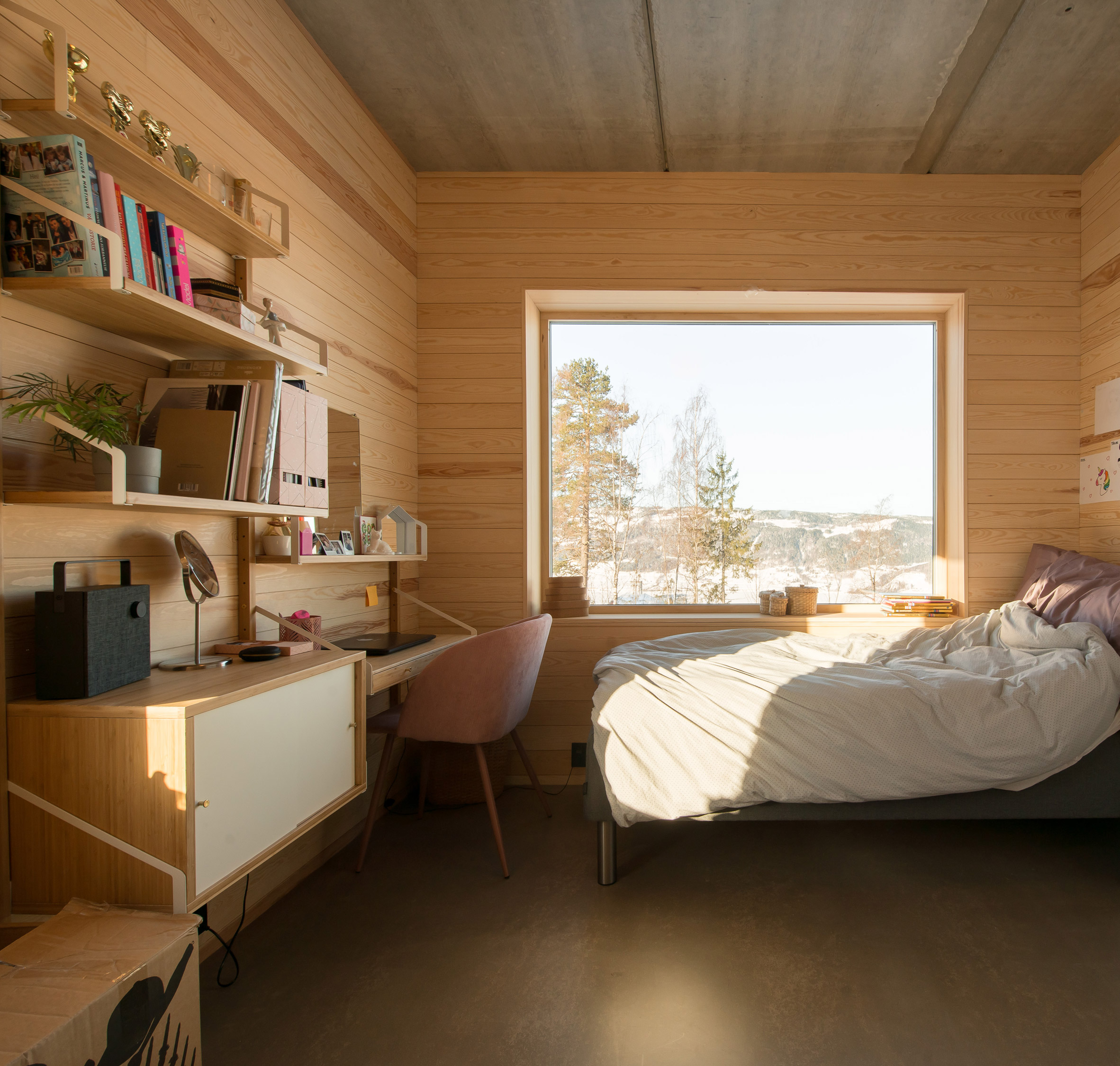 Inside the house, the rough concrete walls and ceilings have been left exposed and are complemented by walls in knot-free pine panelling, which was also used for the ceilings in the kitchen and living room. Pine plywood furniture was built on site.

“A lot of the furniture is specific for each room, which creates a clean interior that is easier to keep tidy in the everyday life,” Sanden said. “The furniture also helps to create an area-effective building.”

Floors were covered in hardwearing cement screed. “It is a house that is built to last by adaption or re-appropriation,” the studio concluded. 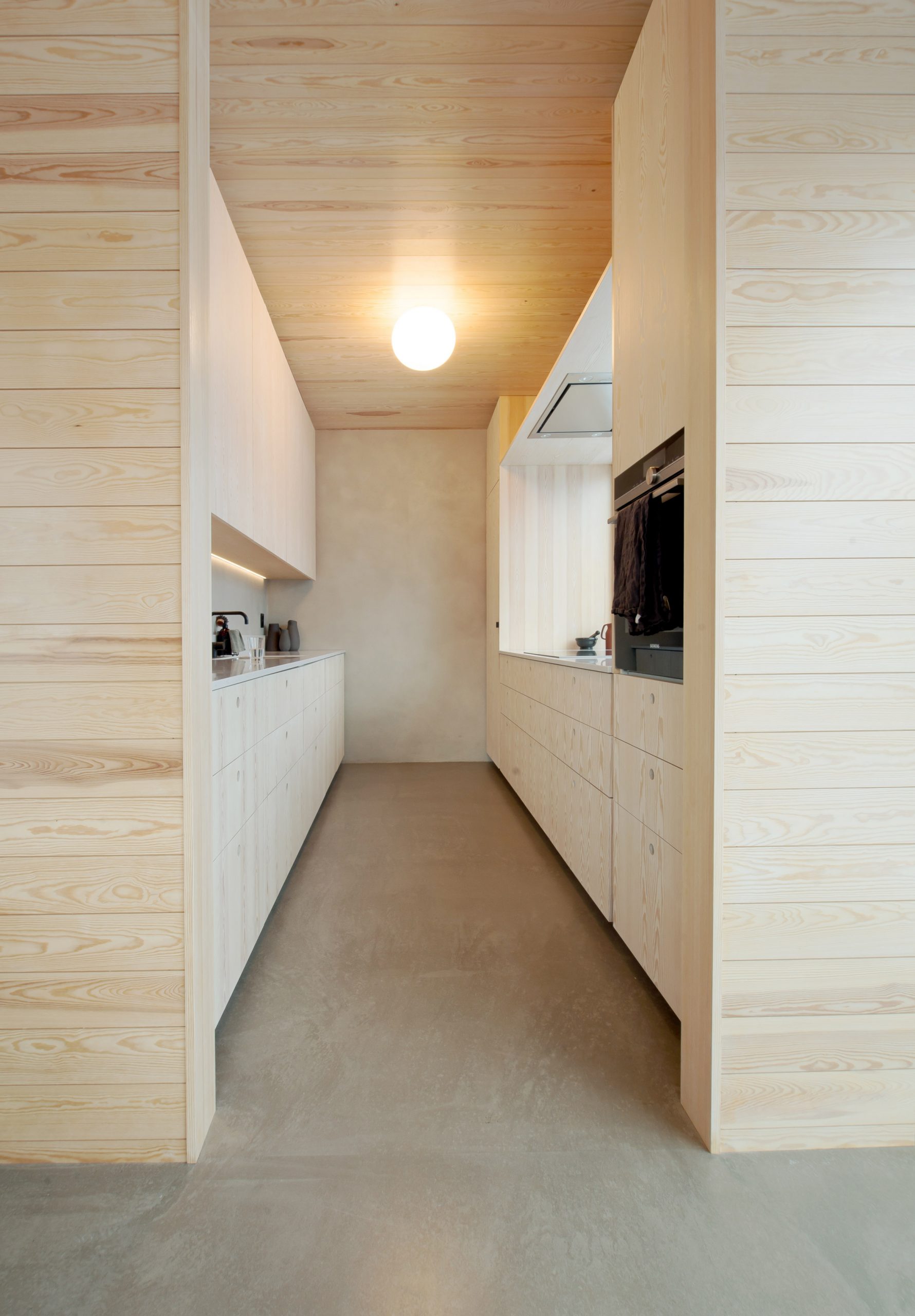 Norweigan studio Sanden+Hodnekvam Arkitekter was founded in 2014 by John Sanden and Ingvild Hodnekvam. The studio also chose to work with concrete and wood when creating a cabin overlooking a Norwegian fjord.

Photography is by Sanden+Hodnekvam Arkitekter.